Catherine, our drummer, is coming over tomorrow night. Chris and Karin are going to cook up some kaese spaetzle.

It sure was yummy last time. 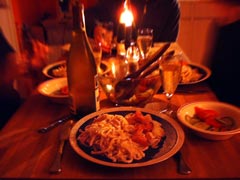 Satellite on a shoestring going strong

Nasa could learn a thing or two from the U.S. Naval Academy Alumni Association. One month after the clever folks in Maryland launched a satellite built for just $50,000 (instead of the originally anticipated $1,000,000), the satellite shows no sign of degrading.

"After a month in orbit, a satellite built by Naval Academy midshipmen with off-the-shelf parts from Radio Shack is exceeding all expectations, sending and receiving messages from ham radio users around the world."