Jessica and I spent the day at the Mac OS X Roadshow which came to town today. Overall, it was pretty good.

The morning session called "Ten on X" was a chance for some of the big software companies to show their flagship products for OS X. The big announcement was from Adobe. They premiered Photoshop 7.It looks like it has some nifty new features. I’ll definitely be making the upgrade anyway.

We were nicely fed with a buffet lunch. Afterwards, we sat in on a couple of seminars. One was on web publishing and the other on audio. The web publishing seminar was basically Adobe and Connectix showing off their stuff - nothing I didn’t already know.

The audio seminar was kind of interesting because it involved somebody plugging a guitar into a Mac to play along to some songs. It’s all powered by some very powerful software that’s out of my league and not really what I need for trying to record a band in a practice room. It was still fun to see how the professionals do it.

All in all, it was an interesting day. I got to play with one of the new iMacs and being inside the Metropole hotel was certainly better than being outside in the howling wind and driving rain. 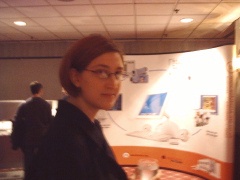