Here’s what it does: when you play a track in iTunes, it looks up the album title at Amazon. If there’s a match, it displays the album cover in a little window. You can then drag this album cover onto your desktop where it functions as a shortcut - click on it to play the album.

After you’ve dragged more than a few album covers out on to your desktop you’ll understand where the application’s name comes from.

Now, I may have a job for the Lazy Web.

Whenever I have iTunes running, not only do I have Clutter open, I also have Kung-Tunes churning away. Kung-Tunes is the application responsible for the "Current iTunes track" thingy on my journal.

What I’d like to do is not only show the title of the track and album that I’m listening to but also show a little thumbnail of the album cover.

I’m guessing some clever person out there has already used Amazon’s API to do just this but I haven’t come across it yet.

In the meantime, here’s a snapshot of my desktop. If you’re bored or easily entertained, see how many of these albums you can name. 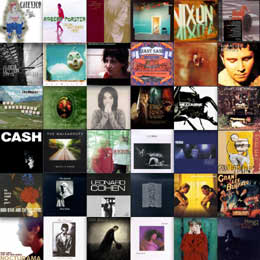 Today is my national holiday.

I’ve celebrated St. Patrick’s Day in many different countries over the past years. This year, it’s England. Previously it’s been Germany, Canada and the USA.

I have to say that the most tasteful celebrations are usually to be found in Ireland itself where the day is marked by modest parades, a day off work and the sporting of a small amount of shamrock on the lapel.

The American celebrations are, by contrast, positively bacchanalian. Everyone gets to be Irish for a day (except the homosexuals) and suffer from the delusion that drinking green beer is somehow a good thing.

I remember finding myself in New Orleans one St. Patrick’s Day. Actually, I spent most of the day in a car on a road trip with some friends. We had set out a couple of days previously from New England.

We arrived in New Orleans in the evening and the festivities were well underway. Still in the car, we took a wrong turn and ended up inching down Bourbon Street in the middle of a throng of revellers.

I overheard a homeless man ask:

To which a happy bystander responded: