Actually, I was originally trying to post my first journal entry via GPRS over Bluetooth. I tried it earlier today as I was sitting at a beachfront cafe but for some reason, I just couldn’t connect.

So instead of this being the first moblog entry, this will instead be the first entry with audio enhancement.

That’s right; I’m going to try to attach a sound file. I’ve been testing this all evening and I think I’ve got it working now (but I really do need to clean up my little homegrown CMS sometime).

I downloaded a few different audio applications from VersionTracker: Audio In, Audio Recorder and Audio X. I tried out each one and they all pretty much do the same thing, namely record snippets of audio.

I also upgraded to Quicktime Pro so that I could edit the soundfiles afterwards.

I just used the built-in microphone on my iBook to do the recording. The quality is surprisingly okay.

The sound file is a snippet of saxaphone played by a busker plying his trade on the seafront. You’ll also hear the sound of passers-by.

The picture was taken at the previously mentioned beachfront cafe where Jessica and I stopped for tea and scones. 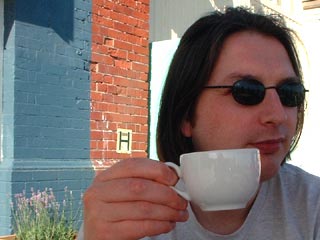