Back of the net!

Dunstan, stuck in San Francisco, can’t share in his countrymen’s fixation on Euro 2004. We were having an iChat about JavaScript during the England vs. Portugal match which went something like this:

"I guess you should report it through the bug-tracking feature in Safari and… PORTUGAL SCORES!!!!"

Having piqued his interest, there was nothing for it but to grab the iSight and point it at the telly.

I’m not sure what I enjoyed more: seeing England get beaten in extra time or watching Dunstan’s face as it happened. 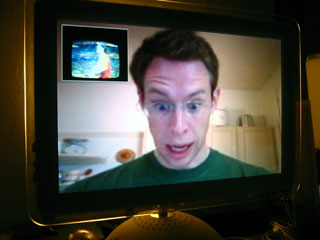 It's a small world after all

I’ve had my iSight for almost a year now but lately it’s been getting a real workout.

Dateline London: Richard buys himself an iSight. He tests it from work by having a video chat with me. I get to see his office.

San Francisco: Dunstan gets an iSight on the same day as Richard. He also puts it through its paces by having a chat with me. Not only do I get to see his apartment, I get to meet Simon Willison who is in town for a web standards world domination gathering. As a regular reader of his many blogs, I felt like a “long time listener, first time caller”.

Sydney: Jeremy Bogan uses his iSight to show me his new-fangled RSS-reading phones.

In return, I can point my iSight out the window and show the world just how miserable the weather has been here in Brighton.

This iChat thing is really taking off (if you decide to follow that link: I am sincerely sorry for the pun).

I’ve also discovered that you can achieve some very trippy effects by pointing an iSight at the same screen on which iChat is running. 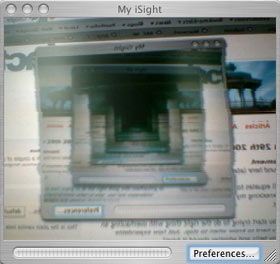