Flexbox for forms - German for black

Here’s a clever use of flexbox: have a form field stretch to fill up most of the space and a button fill up what’s left.

kimono : Turn websites into structured APIs from your browser in seconds

This tool for building ScrAPIs is an interesting development—the current trend for not providing a simple API (or even a simple RSS feed) is being interpreted as damage and routed around.

Some easily-digestible nuggets of advice on public speaking.

A Dive Into Plain JavaScript

A handy one-stop-shop for documentation on web technologies.

Actually, it’s not really that new. Connections has been carved from the belly of Skillswap.

When Skillswap first started, it really was about swapping skills. A group of 9-12 people would get together for about three hours to learn how to use Photoshop, or write code with JavaScript. Over time, Skillswap changed. The audience grew, and the format changed: two back-to-back talks followed by a discussion. The subject matter changed too. It became less about practical skills and more thinky-thinky.

After a while, it got somewhat tedious to have to explain to potential speakers and attendees that they should “just ignore the name—it’s not really about swapping skills.”

Hence, Connections; a much more appropriate name. And yes, it is a nod to Saint James of Burke. 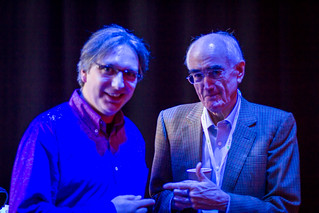 Connections Number One is called Weak Signals. The speakers will be Honor Harger and Justin Pickard. Honor will talk about dark matter. Justin will talk about solarpunk. See the connection?

Connections will take place in the comfy, cosy surrounding of the auditorium in 68 Middle Street. That happens to be downstairs from the Clearleft office, which makes it very convenient for me.

Tickets are available now. They’re free. But if you grab a ticket, you’d better show up. If you can’t make it, please let us know—either me or James—so that we can pass the place along to someone else. If you have a ticket, and you don’t tell us you can’t make, and then you don’t show up, you won’t be able to attend any future editions of Connections …and that would be a real shame, because this is going to be a jolly good series of events.