I turned Huffduffer into a progressive web app recently. It was already running on HTTPS so I didn’t have much to do. One manifest file and one basic Service Worker did the trick. 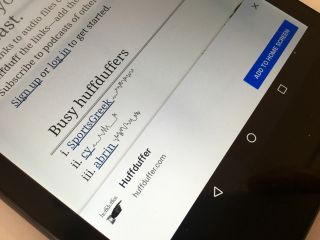 I also did a bit of spring cleaning, refactoring some CSS. The site dates to 2008 so there’s plenty in there that I would do very differently today. Still, considering the age of the code, I wasn’t cursing my past self too much.

After that, I decided to refactor the JavaScript too. There, I had a clear goal: could I remove the dependency on jQuery?

It turned out to be pretty straightforward. I was able to bring my total JavaScript file size down to 3K (gzipped). Pretty much everything I was doing in jQuery could be just as easily accomplished with DOM methods like addEventListener and querySelectorAll, and objects like XMLHttpRequest and classList.

Of course, the reason why half of those handy helpers exist is because of jQuery. Certainly in the case of querySelector and querySelectorAll, jQuery blazed a trail for browsers and standards bodies to pave. In some cases, like animation, the jQuery-led solutions ended up in CSS instead of JavaScript, but the story was the same: developers used the heck of jQuery and browser makers paid attention to that. This is something that Jack spoke about at Render Conf a little while back.

Brian once said of PhoneGap that its ultimate purpose is to cease to exist. I think of jQuery in a similar way.

“[PhoneGap’s] ultimate purpose is to cease to exist. I think of jQuery in a similar way.” adactio.com/journal/10806

“Thank you, jQuery” but apparently he thinks we don’t need you anymore adactio.com/journal/10806

Nice perspective on jQuery from @adactio. Much like the communist state, jQuery’s purpose is to wither away: adactio.com/journal/10806

The @media whirlwind is over. Here’s the short version: it was great.

16 years ago I wrote Feastival

The Brighton Food and Drink Festival has started.