After the eclipse I climbed down from the hilltop and reconnected with the world. That’s when I heard the news. Brian Aldiss had passed away.

I’m trying to remember the first thing I read by Brian Aldiss. I think it might have been The Billion Year Spree, his encyclopaedia of science fiction. The library in my hometown had a copy when I was growing up, and I was devouring everything SF-related.

Decades later I had the great pleasure of meeting the man. It was 2012 and I was in charge of putting together the line-up for that year’s dConstruct. I had the brilliant Lauren Beukes on the line-up all the way from South Africa and I thought it would be fun to organise some kind of sci-fi author event the evening before. Well, one thing led to another: Rifa introduced me to Tim Aldiss, who passed along a request to his father, who kindly agreed to come to Brighton for the event. Then Brighton-based Jeff Noon came on board. The end result was an hour and a half in the company of three fantastic—and fantastically different—authors.

I had the huge honour of moderating the event. Here’s the transcript of that evening and here’s the audio.

That evening and the subsequent dConstruct talks—including the mighty James Burke—combined to create one of the greatest weekends of my life. Seriously. I thought it was just me, but Chris has also written about how special that author event was. 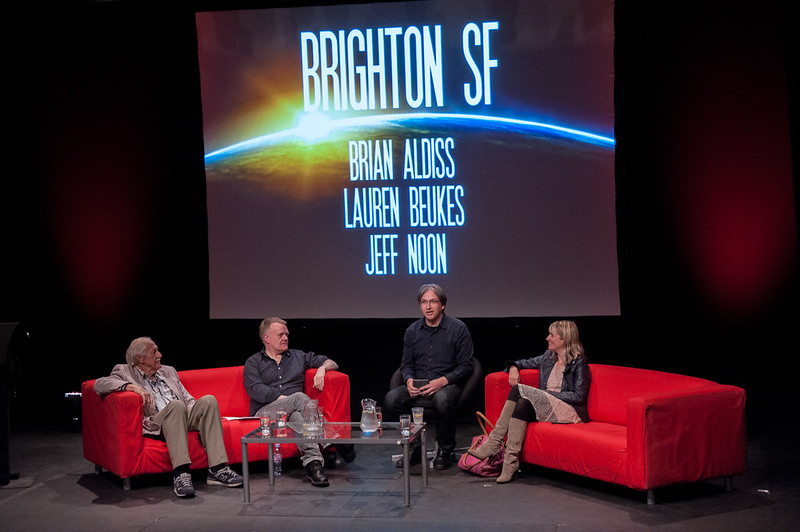 Brian Aldiss was simply wonderful that evening. He regaled us with the most marvellous stories, at times hilarious, at other times incredibly touching. He was a true gentleman.

I’ve barely made a dent into the ludicrously prolific output of the man. I’ve read just some of his books:

Then there are the short stories. Hundreds of ‘em! Most famously Super-Toys Last All Summer Long—inspiration for the Kubrick/Spielberg A.I. film. It’s one of the most incredibly sad stories I’ve ever read. I find it hard to read it without weeping.

Whenever a great artist dies, it has become a cliché to say that they will live on through their work. In the case of Brian Aldiss and his astounding output, it’s quite literally true. I’m looking forward to many, many years of reading his words.

My sincerest condolences to his son Tim, his partner Alison, and everyone who knew and loved Brian Aldiss.

3 years ago I wrote Why do pull quotes exist on the web?

Won’t somebody think of the readers?

4 years ago I wrote Recently speculative

6 years ago I wrote August in America, day twenty

9 years ago I wrote Slight return

Information wants to be geostamped.

17 years ago I wrote Sleep the dream!

In honour of National Slackerday 3 here in the UK, I will do no work today.