Last week, on Richard’s recommendation, Jessica and I went out to eat at relatively new Kemp Town establishment, The Ginger Dog—all in the name of research for Prinicipia Gastronomica of course.

Being relatively new to this neighbourhood, I wanted to make sure we didn’t go astray. I don’t have an iPhone but I do have an iPod Touch so, before leaving the house, I loaded up the map app with walking directions. 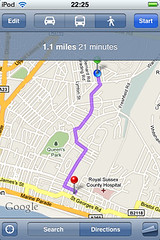 Even though I didn’t have 3G, or even WiFi, to help me on my perambulation, the iPod Touch does have triangulation. So every time I checked the map, a blue dot marked my spot. I just had to make sure that the blue dot didn’t stray off the purple line.

On the way back, I opened up the map app again to retrace my steps. This time, the map tiles didn’t load. But my route home was still marked in purple, and the blue dot still showed my position.

That’s when I realised that all the other information on the map—the streets and landmarks—were irrelevant to the task of navigating my way from A to B. All I needed to do was keep the blue dot on the purple line. It’s the minimum information density for wayfinding: the mapping equivalent of a sparkline. 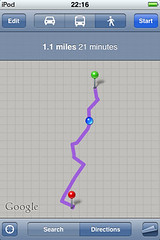 17 years ago I wrote Reloaded Reviewed

Jessica and I went to the cinema today to see The Matrix Reloaded.

18 years ago I wrote Spamming for spam

Here’s an article, written by an idiot, called "Why I love spam".