When I was at South by Southwest back in March, I got very inspired by the Open Science panel moderated by Tantek. You can listen to that panel for yourself:

Round about the 43 minute mark—when Natalie Villalobos is talking about all the fantastic APIs and datasets that are out there—is the moment when I leaned over and whispered to Riccardo:

We should have a Science Hack Day.

Three months later, on the 19th and 20th of June, Science Hack Day happened. I still can’t quite believe it.

The event was a great success, and more importantly, it was a lot of fun. But you can read all about that on the website, on Twitter and elsewhere. What I want to talk about is how Science Hack Day came together.

When I first blogged about the day, right after the Open Science panel at South by Southwest, I wrote:

I have no idea how to get a venue or sponsors.

The first thing I did was to set up a wiki to get people brainstorming. Many of the proposed venues were places that had previously hosted BarCamps or other geek gatherings requiring plentiful bandwidth and/or sleepover capability. The Guardian offices came up quite early on. I hadn’t been there myself but I knew that it had been the venue for BarCamp London 6.

I got in touch with Matt McAlister at The Guardian who, in a previous life, helped organise the first ever UK Hack Day. He gave the green light and in no time at all, I was talking to Alex Hazell, Events Executive at The Guardian. Her experience in organising previous events was invaluable in figuring out how to approach potential sponsors.

Here’s what you need for a hack day:

The first two were taken care of. The second two require money. The prizes are less of a priority but food and drink is essential hack fuel. That’s where the sponsors come in.

Lunches and breakfasts could be provided by The Guardian catering staff but that requires paying for staffing costs as well as food. All in all, it’s about £2.5K for the number of people expected at Science Hack Day. That still left Saturday evening food. Pizza is the traditional dish of choice. £500 ought to cover it. Throw in another few hundred quid for prizes and that comes to about £3000.

Rather than approaching companies to sponsor the whole amount, Alex recommended that I try asking for around £500 from each company I got in touch with. That’s a good amount of money but it’s small enough that people might be able to approve it without having to go through lots of bureaucratic procedures within their companies.

That turned out to be a good policy and before long, quite a few companies had agreed to sponsor the event. Fortunately for me, The Guardian’s events team were able to bill them individually which meant I didn’t have to deal with that side of things. The Wellcome Trust, Nature, Thoughtworks, LCGOT and Elsevier were all invoiced separately for their contributions to the fund for canteen food and prizes.

The pizza money came from YDN. As Christian was going to be there anyway, it was convenient for him to pay for the pizza with his company card rather than chasing the paper trail of Yahoo’s invoicing system.

In retrospect, I probably could have got the lunches and breakfasts more cheaply by just getting sandwiches and pastries delivered but then I would have either needed sponsors that were capable of paying on the spot or I would have needed to pay for it myself and then reclaim it by invoicing sponsors.

Murray got company approval and I left him to organise the booze for the event—£500 worth of booze. I thought that would be just about right. But I was thinking back to previous BarCamps, not hack days. It turns out that while beer is definitely required for lubricating late night games of Werewolf, it’s actually not all that important to hacking.

It seems obvious in hindsight, but what hackers need are stimulants, not depressants. Fortunately, there was plenty of tea and coffee on hand. By the end of the event, there was also a massive surplus of beer.

Ah well, you live and learn.

The final sponsor was BERG. Their contribution wasn’t as large as the others but it had the advantage of being given in cash. That meant I had a petty cash fund throughout the day for repeat trips to the nearest supermarket for crisps, chocolate, and fruit. The latter food group was important because it was one that I had overlooked.

So two valuable lessons learned were:

But those are relatively minor points. On the whole, everything went incredibly well.

The total cost was around £4,000 but I reckon it would be possible to organise a two-day event like this for half that much by removing the staffing costs (and the drink costs) if you’re okay with sandwiches for lunch and you don’t mind not having many shiny prizes—we had Lego Mindstorms and telescopes for the winners.

About 120 people signed up on the wiki. Another 20 or so listed themselves as “maybe.” I figured there would be the usual drop-out rate so I was expecting 80 or 90 people to make it on the day. That turned out to be a fairly accurate assessment. By Sunday, the numbers were down to around 75 because of non-returners: people who went home, rather than sleeping over, and then didn’t come back in the next day. A lot of those people couldn’t make it back because of family commitments—Sunday was Father’s Day.

In the run-up to Science Hack Day, I wasn’t sure whether or not to create an EventBrite listing to manage attendance. But the wiki seemed to be working pretty well so I just stuck with that. Instead of emailing people, I used the Science Hack Day website and Twitter account to keep everyone up to date and to get some pre-event excitement going.

I had a lot of help and support. Jessica helped out for the duration of Science Hack Day—I couldn’t have done it without her. In the weeks and months before the event, Matt Locke made some valuable introductions Natalie Villalobos went above and beyond the call of duty in putting me in touch with potential sponsors. Through her connections, I had the unbelievable honour of playing a specially recorded message at Science Hack Day from SETI’s Jill Tarter—the real-life inspiration for Ellie Arroway in Carl Sagan’s Contact:

I’m so glad that, straight after being inspired by the Open Science panel at South by Southwest, I blogged my crazy idea to create a Science Hack Day. By planting a flag in the sand like that, it stopped being just another bit of wishful thinking and starting to become real.

If I can do it, anyone can. And anyone should. There’s already a wiki page for other cities where Science Hack Days might be organised. You can help put one of those events together.

Get excited and make things …with science! 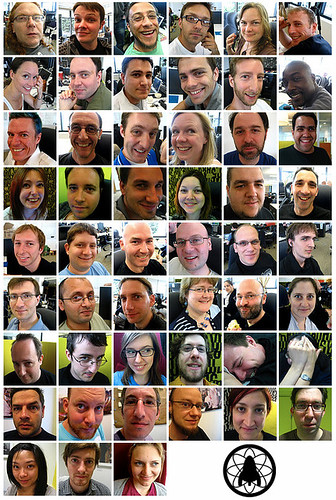 10 years ago I wrote An Event Apart Boston, Day One

Wrapping up a day’s liveblogging and speaking

10 years ago I wrote DIY UX: Give Your Users an Upgrade (Without Calling In a Pro)

10 years ago I wrote Designing with Psychology in Mind

10 years ago I wrote Thinking Small

10 years ago I wrote Revealing Design Treasures from The Amazon

A different kind of conference.

16 years ago I wrote Proud work

I’ve been updating my portfolio with some sites I’ve worked on recently. All of them are table-free, valid XHTML/CSS pieces of work.