On Thursday of last week, Summer arrived in England. I accept full responsibility for this. That morning I left the house early and wore a winter coat. So of course the day was filled with glorious sunshine.

I was up early to head into the Clearleft studio to do a tech check and some pre-records for the upcoming UX Fest. We’ve turned a meeting room into a very swanky-looking recording studio with proper lights, mics, and camera. I’ll be hosting UX Fest, channeling my inner Alan Partridge and Ron Burgundy. 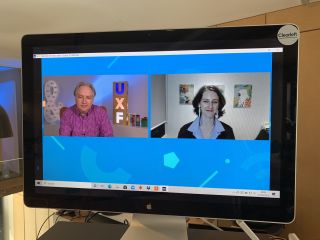 Being back in the studio was nice. Some of my Clearleft colleagues joined the agency during The Situation so this was my first chance to meet some of them face to face (or facemask to facemask at least).

The next day I had even more opportunity to see my co-workers without the barriers of computer screens. We had a workplace walk in the countryside to mark one year of becoming an employee-owned agency. We rendezvoused at Devil’s Dyke and walked a bit of the Sussex countryside, just enough to work up an appetite and a thirst to be satiated at the nearby Shepherd and Dog pub in Fulking (near the brilliantly named Fulking Hill). We sat at tables outside, had pints of ale, and a proper pub lunch, chatting all the while, just like in The Before Times. 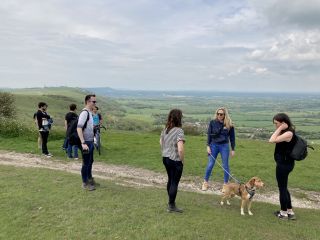 When I got back to Brighton I met up with Jessica for a beer in the sun before wandered down to the beach together to meet our friend Kate and celebrate her birthday. 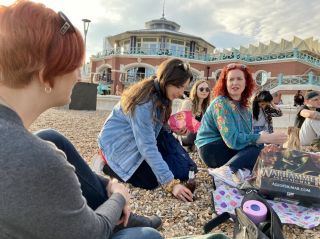 Two days of good weather was a blessing, but it didn’t stop there. The next day, Saturday, was even sunnier. We spent the day working in the garden. We planted salads in our raised beds and then fortified those raised beds to make them impenatrable to the family of foxes living in our neighbourbood. Don’t get me wrong, the fox cubs are very cute. I just don’t want them digging up our salads. 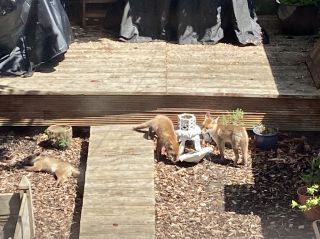 On Sunday, Jessica and I sauntered up the hill to Brighton Racecourse so we could cheer on Jake as he finished his hundred kilometre walk from London to Brighton. Normally this would be a very strange behaviour, but it was all for a good cause.

After that, we had a pub lunch (outdoors, of course) before heading home. I spent the rest of the day sitting out in the garden, admiring the handiwork of the previous day, reading and occasionally dozing.

Today it’s more of the same. Glorious sunshine. Sitting in the garden. Reading. Playing some tunes on the mandolin. Looking forward to grilling outside for the third evening in a row. 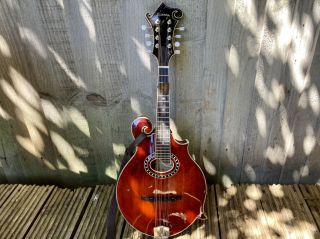 It feels like something is changing and it’s not just the weather. The Situation, while far from ending, is certainly morphing. I still don’t plan on spending any time indoors, but with weather this good, I don’t need to.

In two weeks time I’ll get my second jab of vaccine. Two weeks after that I can start letting my guard down a bit more. Until then, I’ll be staying outdoors. If the weather continues like this, that won’t be a hardship.

So, I did not know this, but microformat parsers tend to treat photo (and video) posts a bit differently. Turns out you should not just add u-photo to every image in a post! (I mean, I never actually did, but this was still new to me.)

Long story short: if you want h-feed aggregators to display your post in an Instagram-like manner, u-photo is probably in order. (The same goes for u-video, by the way.)

Also, the image doesn’t have to be inside e-content! In fact, most parsers will actually remove it from the e-content, which they’ll then treat as the image’s “caption”—again, think Instagram. (No worries, the image itself is still going to be displayed, typically below the, uh, “caption.” Like, that’s why it’s removed from the content, to avoid duplicate images.)

(Here, too, I’ve always had my u-photo images outside of my e-content. Wasn’t until I started looking into other people’s posts that I noticed this behavior.)

Fun fact: parsers are a bit inconsistent here, it seems.

X-Ray, which powers Aperture, removes all img tags if at least one u-photo is present. (It also removes all video tags, simply because it doesn’t yet support video. It does, however, recognize u-video, so that clients are still able to display videos the same way they display photos. The same happens to [equally unsupported] picture elements.)

Fun fact: my reader—still a work in progress—runs on X-Ray, too, but I have added HTML5 element support. Which means video and picture are no longer automatically stripped—I don’t want them to. Which means I will have to “actively” remove them, but only for photo and video posts, of course. *phew*

Anyway, as an example: if you’re using img and u-photo inside a figure with figcaption, that is going to get displayed pretty funky for a whole lot of folks.

Indigenous seems to just move all images to the bottom of a post, regardless of its post type.

Oh, and you can have multiple u-photo images. They’ll be displayed in a gallery of sorts. But they, too, will probably disappear from your e-content, at least for h-feed followers.

And just when I thought I had it figured out, I stumbled upon Jeremy Keith’s Summertime in England, which is sort of an article and a photo post at the same time. It works in this case, though, because of how carefully written that post is.

3 years ago I wrote The World-Wide Work

You need to see Ethan’s closing talk from this year’s New Adventures conference.

10 years ago I wrote Pepys out

The end of an internet era.

HTML5 and Flash, sitting in a tree.

14 years ago I wrote Alasgone

The land of the midnight sun.