I had a meeting with a potential client on Wednesday. This meeting was going to be a bit more formal than what I’m normally used to.

Unfortunately, I didn’t have a thing to wear (nothing I would really consider "formal", anyway), so Jessica and I went in search of an outfit that would suit the occasion.

Before venturing into the intimidating territory of men’s suit shops we decided to have a quick peek in the local Oxfam shop. It was a fortuitous decision.

We found a complete three-piece wool suit for less than ten pounds. It fits me like a glove.

After that, our quest became a lot simpler. We found a nice tie and a plain white shirt.

I thought I’d feel really uncomortable wearing a suit but instead I felt very… dapper. Slick. Downright cool, even.

This isn’t the usual charity shop suit, either. You know the ones; relics of the seventies with collars designed with lift and wingspan in mind. This suit has a more modern cut.

In fact, I know that it hasn’t been in the Oxfam shop for long. In the jacket pocket I found placecards for "Ruth" and "David" at "Claire and Andrew’s wedding, 9th March, 2002".

Now it’s mine, all mine.

Oh, and the meeting went pretty well, I thought. 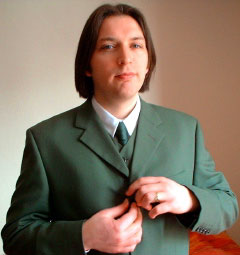