Because I was so busy, the two-year anniversary of Huffduffer passed unnoticed back in October. Two years! It’s hard to believe. It seems like just yesterday that I launched it. It’s been ticking along nicely for all that time and I’ve been tweaking it whenever I get the chance.

YouTube, Flickr, Vimeo and a whole host of other sites support oEmbed and the Embedly service provides easy access to all of them. Now Huffduffer is listed amongst the 160 oEmbed providers supported by Embedly. Maybe if I make the right ritual sacrifices, perhaps Huffduffer players might start showing up in New Twitter: it uses a combination of oEmbed and a whitelist to display third-party content in the side panel.

I made some tweaks to the front-end of Huffduffer recently too. For starters, you might notice that the body copy font size has been bumped up from fourteen pixels to sixteen. While fourteen pixels is perfectly fine for Helvetica or Georgia, it’s just that little bit too small for Baskerville.

While I was in there messing around with the CSS, I took the opportunity to tweak the small screen rendering. 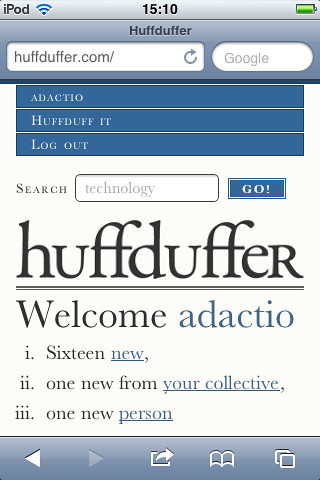 For a start, I changed the way that the media queries are executed. Instead of beginning with the wide-screen “desktop” layout as the default and then undoing the widths and floats for smaller screens, I’m now using the same technique I’ve tried out here on adactio.com: begin with a linear layout-less flow and only add widths and floats within media query blocks. That way, mobile devices that don’t support media queries will still get the linearised view.

The elephant in the room is, once again, Internet Explorer (below version nine, anyway). While I can quite merrily say “screw ‘em” here on adactio.com, I need to make more of an effort for Huffduffer. So I split up my CSS into two files: a global.css file that contains all the typography and colour rules, and layout.css that contains a default wide-screen “desktop” view followed by media queries for narrower widths. This is how I’m calling both stylesheets:

See how the layout.css file is being called twice? Once for browsers that support media queries (with a browser width wider than thirty ems) and again for Internet Explorer less than version nine.

Mobile devices that don’t support media queries or conditional comments will never load the layout.css file. Browsers that do support media queries, be they mobile or desktop, will only execute layout.css if the viewport is at least thirty ems wide. Legacy versions of Internet Explorer will always load layout.css because of the conditional comment. It’s entirely possible that Windows Mobile 7 will also load layout.css because the browser is currently using an IE7 codebase (Trident 3.1, to be precise). Screw ‘em …at least until Microsoft bring out an update.

The disadvantage of this technique is that my CSS is now split up into two separate files. I’d much rather keep HTTP requests to a minimum by having just one style sheet, but I think that, in this case, the reward in cross-browser compatibility is worth the expense of that extra hit.

While I was testing the changes, I noticed something interesting on my iPod Touch when I was at the Clearleft office, where we have the stereo connected to the WiFi network. The most recent iOS update allows you to stream directly from your device to your stereo or television. What I didn’t realise was that this is true of any media, including HTML5 video and audio content in a web page. Nice! 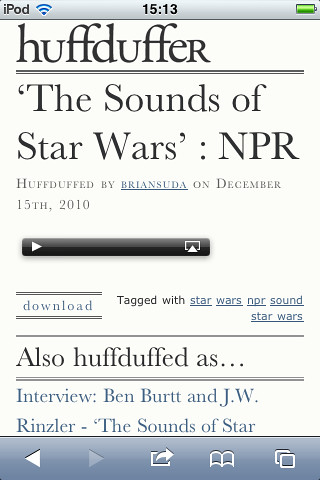 12 years ago I wrote Hacky holidays on OS X