It’s been quite a busy week for me.

I’ve been doing a lot of HTML and CSS with some local new media companies. At the same time, the band had a concert last night and we’re going into the studio tomorrow. Phew!

The concert was okay. It was more like a party, really; a meatspace gathering of people from the Brighton New Media mailing list. Most people were more interested in drinking and socialising than listening to the band, which is fair enough considering that that was the whole point of the evening.

The venue was great, though. It was our second time playing in the Hanbury Ballroom, a wonderfully atmospheric place that, rumour has it, was once a mausoleum.

The room has a decorated cupola that not only looks great, but also adds a lovely natural reverb to the vocals. 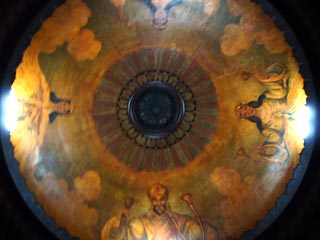