I spent the weekend at The Guardian offices in London at History Hack Day. It was rather excellent. You’d think I’d get used to the wonderful nature of these kinds of events, but I once again I experienced the same level of amazement that I experienced the first time I went to hack day.

The weekend kicked off in the traditional way with some quickfire talks. Some lovely people from The British Museum, The British Library and The National Archives talked about their datasets, evangelists from Yahoo and Google talked about YQL and Fusion Tables, and Max Gadney and Matthew Sheret got us thinking in the right directions.

Matthew Sheret was particularly inspiring, equating hackers with time travellers, and encouraging us to find and explore the stories within the data of history. The assembled geeks certainly took that message to heart.

Ben Griffiths told the story of his great-uncle, who died returning from a bomber raid on Bremen in 1941. Using data to put the death in context, Ben approached the story of the lost bomber with sensitivity.

Simon created geStation, a timeline of when railway stations opened in the UK. On the face of it, it sounds like just another mashup of datetimes and lat-long coordinates. But when you run it, you can see the story of the industrial revolution emerge on the map.

I was so impressed with the Tropo API that I spent most of History Hack Day working on a little something for Huffduffer …more on that later.

My contribution to the hack day was very modest, but it was one of the few to involve something non-digital. It’s called London On A Stick.

A pile of USB sticks had been donated to History Hack Day, but nobody was making much use of them so I thought they could be used as fodder for Dead Drops. I took five USB sticks and placed a picture from The National Archives on Flickr Commons on each one. Each picture was taken somewhere in London and has been geotagged. 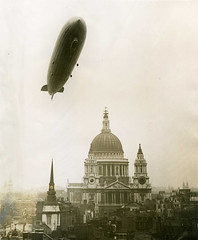 I slapped sticky notes on the USB sticks with the location of the picture. Then I asked for volunteers to go out and place the sticks at the locations of the pictures: Paddington, Trafalgar Square, Upper Lambeth, St. Paul’s and Tower Bridge. Not being a Londoner myself, I’m relying on the natives to take up the challenge. You can find the locations at icanhaz.com/londononastick. I ducked out of History Hack Day a bit early to get back to Brighton so I have no idea if the five sticks were claimed.

Although my contribution to History Hack Day was very modest, I had a really good time. Matt did a great job putting on an excellent event.

It was an eye-opening weekend. This hack day put the “story” back into history.

14 years ago I wrote Met so blue

It’s been a busy weekend here at Chez J&J. Following in the footsteps of fellow Canadians, Derek and Joe, Dave came to visit.

When I was back in Ireland for Christmas, I helped a friend to clean his parent’s PC of spyware. There were about 30 separate pieces of malware lurking inside the computer. His cousin’s computer had over 100.

There’s a new picture of me up on The Mirror Project. I took the picture yesterday at band practice in the aptly named Black Bunker rehearsal room.