The Brads were there. The Spiderwomen were there. Anton was there drawing the speakers as robots.

I surprised myself by successfully liveblogging all six talks on the first day:

I received lots of nice emails and tweets from people thanking me for the liveblogging. Some people remarked that it was almost like being there. But that simply isn’t true. You really had to be there to experience it.

Still, a long-form report in the shape of a blog post is better than live tweeting, which is like trying to understand a conversation two houses away by putting your ear a cup filled with cotton wool pressed to the wall.

I didn’t do any liveblogging on the second day as I was too nervous before—and too relieved after—delivering my own talk. But Luke took some notes:

Adam D. Scott has notes from all the talks including the triumphant finalés from Mark and Jeff.

Like I said, I was relieved when my talk was done. I was thrilled and surprised by how many people said they enjoyed it. This was a different talk to the one I gave at An Event Apart in Seattle. Back then I gave a talk on design principles but as Whitney was presenting on the same topic in Boston, I took the opportunity to rant about something very dear to my heart: digital preservation.

Usually when I craft a presentation for An Event Apart, I try to create a mixture of the the inspirational and the practical. But this talk had nothing practical at all. It wasn’t exactly inspirational either. If anything, the topic is somewhat depressing.

And yet, people liked it. I can’t even begin to describe how it makes me feel that Zeldman wrote:

Although it is hard to pick highlights among such great speakers and topics, this talk was a highlight for me. As in, it blew my mind. Several people said it should be a TED talk.

This is the talk that I had proposed for South By Southwest. It was rejected. ‘Nuff said.

There are going to be four more instantiations of An Event Apart this year and I hope to repeat my rant on digital preservation at at least one of them. If you haven’t been to An Event Apart, I highly recommend registering for one near you.

But I have to say, excellent as the conference always is, An Event Apart Boston 2011 will always have a special place in my heart. 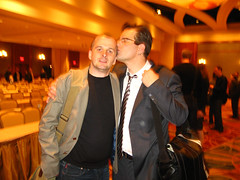 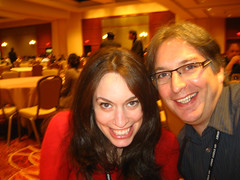 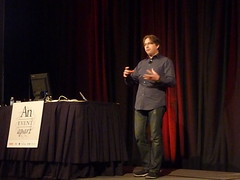 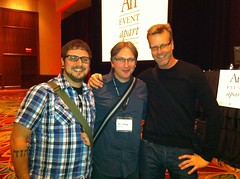 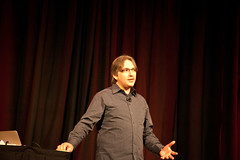 11 years ago I wrote The Medium is the Mess

Scribbling in the margins of the rule book.

Liveblogging a presentation by Steven Pemberton at XTech 2008 in Dublin.

12 years ago I wrote Data Portability For Whom?

Liveblogging a talk by Gavin Bell at XTech 2008 in Dublin.

Liveblogging a presentation by Simon Batistoni at XTech 2008 in Dublin.

12 years ago I wrote AMEE — The World’s Energy Meter

Liveblogging a talk by Gavin Starks at XTech 2008 in Dublin.

14 years ago I wrote The waste (memory wastes)

16 years ago I wrote Brighton rock

The Brighton Festival is in full swing. Everywhere you look, there’s theatre, music, dance and art.

17 years ago I wrote Malkovich, Malkovich