I had a good productive Responsive Enhancement workshop in Düsseldorf and Marc was an excellent host. But alas, I couldn’t stick around for the rest of the Beyond Tellerrand conference which was, by all accounts, excellent.

I made my way back to the UK post-haste and started playing rail parkour to get across the country to Herefordshire. There lies The Colloquy—the rural but very comfy location for Clearleft’s week of hacking in the countryside.

Casing out the joint 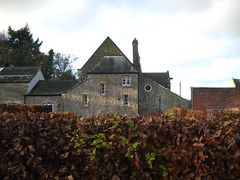 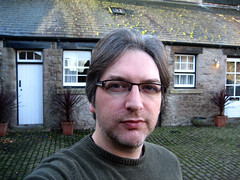 We called it Hackfarm. The idea was pretty straightforward. For one week we would sequester ourselves in a farmhouse (admittedly it was a farmhouse with a jacuzzi), decide on A Thing to build and then …build it.

Max and Mike graciously agreed to join us with their considerable dev talents. Jessica also joined us, rising to the considerable challenge of catering for a dozen people.

We didn’t know what we were going to build, ‘though some people had some ideas. We spent the first evening listening to those ideas, discussing them and voting on them until we came to an agreement and decided what the project would be. The next morning, Hackfarm began in earnest.

Part of Hackfarm’s raison d’être was to try out some new things. In that spirit, Andy introduced to the Kanban method and we gave it a whirl.

Everyone got involved in the design process, splitting into ad-hoc groups to figure out personas, generate user stories and sketch interface ideas. It was equal parts hard work and really good fun.

As the ideas solidified, we shifted to our laptops, firing up graphics programmes and text editors, ready to get down to some building. Again, collaboration was the key. Developers and designers sat down together, pushing pixels and cranking out code. 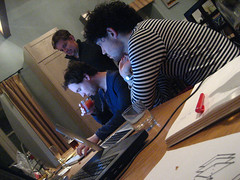 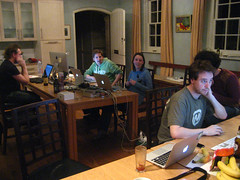 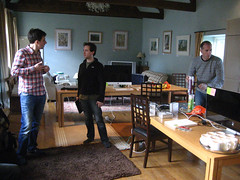 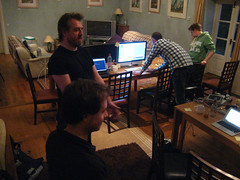 By the end of the week we had a working website.

Now there are plenty of map-based narratives out there on the web but many of them suffer from what Schuyler Erle calls red dot fever: a bunch of points shown on a map all at once. One of the design principles that emerged early on at Hackfarm was that the map was secondary to narrative. When you’re reading a story in a book, you don’t know where the next chapter will take you.

Compare this Google Maps narrative with the corresponding Map Tale.

It’s a simple narrative device but it adapts well to stories of all sizes. Rich put together a Mediterranean-spanning Map Tale for The Odyssey while I documented the tale of recreating shots from The Matrix in their filming locations in downtown Sydney.

The site went live on the last full day of Hackfarm but we’ve kept it quiet ‘till now while we sorted out some of the rough edges. I’ve been tweaking the small screen styles a bit while Andy has been working like crazy to finesse the tale creation process.

I know I’m biased but I really, really like Map Tales. I like that it allows anyone to tell a story and then share it or embed it on their own website. I like that doesn’t require any kind of sign-up or log-in process (you get a secret URL for every tale you create that allows you to go back and edit it). I like that it isn’t trying to be another social network.

And I really, really, really like the people who made this. I count myself very fortunate indeed to work with such a great group of smart and talented friends. 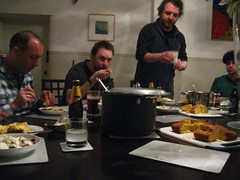 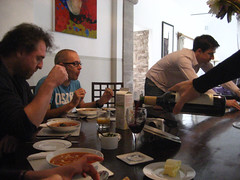 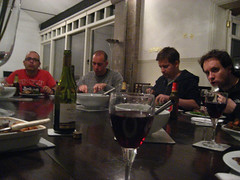 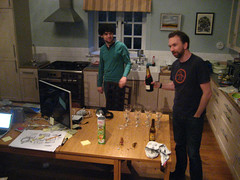 9 years ago I wrote Adfonting

An advent calendar for fonts, complete with responsive layout.

9 years ago I wrote Spacelogging

11 years ago I wrote Iron Man and me

The story of how one of my Flickr pictures came to be used in a Hollywood movie.

12 years ago I wrote Dripping

15 years ago I wrote Back from Baltimore

I’m back in Brighton after a fairly short and painless jet-stream aided journey from Baltimore.

Here’s a message I sent earlier through the contact page at Macoholics:

16 years ago I wrote Renaissance theme

One week ago I was in Bologna. I was walking through cobblestoned streets lined with red-roofed old buildings. Many of the buildings were painted in the typical Renaissance style of yellows, browns and oranges.

17 years ago I wrote Puerto Muerto

Another weekend, another concert organised by The Gilded Palace of Sin.

18 years ago I wrote The Science Museum

As of today, there is no admission price for the Science Museum or the Natural History Museum.