Which is why it’s such a pleasure to be in Arizona right now. It’s January but I’m able to walk around wearing sunglasses without a jacket (a jacket for me, that is; not the sunglasses).

The journey here was long and not quite as uneventful as I would have liked. Suffice to say that the stop-over in Dallas was more of a dash-over, as in "dash over to this gate because we’ve suddenly decided that your flight, which is leaving in ten minutes, is going from there and not the gate we told you when you first got through the half hour spent waiting in line at emigration".

Still, after one good night’s sleep I’m fully recovered from the journey and I’m able to enjoy the warm climate of southern Arizona.

It’s hard to believe that just yesterday I was sitting in an aeroplane on a frosty, cold Gatwick runway watching the wings being de-iced. 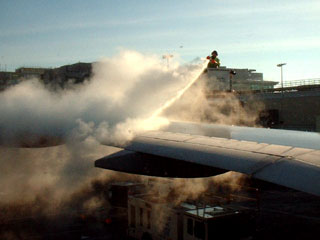