Left to our own devices

In the final part of his series on responsive design in .net magazine, Paul talks about testing:

The key thing to remember here is that any testing is better than no testing. Build up a test suite as large as you can afford, and find opportunities to test on other devices whenever you can.

I agree wholeheartedly and I think that any kind of testing with real devices should be encouraged. I find it disheartening when somebody blogs or tweets about testing on a particular device, only to be rebuffed with sentiments like “it isn’t enough.” It’s true—it isn’t enough …but it’s never enough. And the fact that a developer is doing any testing at all is a good thing.

There are some good resources out there to help you get started in putting together a collection of test devices.

Actually, you should probably just read everything on Stephanie’s site: it’s all thoughtful and useful. In her post on the value of 1000 Androids she wrote:

The dirty little secret is that the more you test—the more accurately you will determine when it’s ok not to.

In fact I’ve found that one of the greatest benefits of testing on as many different platforms as possible is that it stops me from straying down the path of device-specific development. When I come across a problem in my testing, my reaction isn’t to think “how can I fix this problem on this particular device?”, which would probably involve throwing more code at it. Instead I think “how can I avoid this problem?” The particular device may have highlighted the issue, but there’s almost always a more fundamental problem to be tackled …and it’s very rarely tackled by throwing more code at it.

I wish I had more devices to test on …even if it might increase the risk of me getting reported to the police. At the same time, I realise that it’s a pretty crumby and expensive situation for developers, particularly freelancers. As Paul wrote:

Not only does it present a potential barrier to entry for anyone wanting to build responsive websites, but it encourages the purchase of yet more devices and gadgets.

I’ve been keeping my costs down by shopping in dodgy second-hand electronics shops that sell devices that have fallen off the back of a lorry. Most of them sell phones with a classification of A, B, or C. If something is labelled A, it is mint condition. If something is labelled C, there might be something wrong with it or you might not get all the cables or the box. But for my purposes, that’s absolutely fine. If anything, I’m usually hunting for outdated devices with older versions of operating systems. 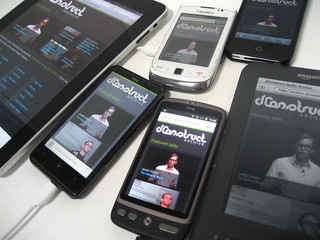 I don’t know about you, but my eyes glaze over when it comes to phone models and operating system numbers, especially when they just end up sounding like condoms. Luckily we’ve got people like PPK to help us figure out the smartphone browser landscape.

You’ll notice plenty of glaring omissions in my paltry list—there’s nary a Nokia device to be found—but I aim to plug those gaps as soon as I can.

In the meantime I’ve been setting up a desk at the Clearleft office for these devices so that they can stay charged up and within reach. 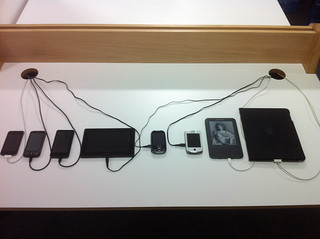 We’ve always had an open-door policy here, so if you want to pop around, use our WiFi, and test on our devices, you’re more than welcome. Give me some advance warning on Twitter and I can put the kettle on for a cup of tea. We’re at 28 Kensington Street, Suite 2.

Think of it as a quick’n’dirty, much smaller-scale version of Mobile Portland’s Device Lab.

@adactio It was (and is) an awesome idea! It’s lonely down here in Sub-Saharan Africa, though… :-/

@adactio Hardcore testing :) You test even on game consoles?

Casey Phillips did a nice write-up of the Chattanooga Open Device Lab in today’s paper. It even has the requisite shout-outs to Jeremy Keith and OpenDeviceLab.com

16 years ago I wrote Songs from the web

iTunes 4.5 was released earlier this week.

18 years ago I wrote The Trash Compactor Debate

On the Implausibility of the Death Star’s Trash Compactor:

Apple have released a new computer specifically for the education market - the eMac (the "e" is for education).