When I was helping Bevan with making the dConstruct site, I kept banging on to him about the importance of performance.

Don’t get me wrong: I wanted the site to look great, but I also very much wanted it to feel great …and nothing affects the feel of a site (the user’s experience, if you will) more than performance. As Jason wrote:

If you could only do one thing to prepare your desktop site for mobile and had to choose between employing media queries to make it look good on a mobile device or optimizing the site for performance, you would be better served by making the desktop site blazingly fast.

And yet this fundamental aspect of how performant a site is going to be is all too often left until the development phase. I’d really like to see it taken into account much earlier on, during the UX and visual design phases.

Anyway, as the dConstruct site came together, I just kept asking “What would Steve Souders do?”

For a start, that meant ripping out any boilerplate markup and CSS that was there “just in case.” I very much agree with Rachel when she says stop solving problems you don’t yet have. But one of the areas where the unfortunately-named HTML5 Boilerplate excels is in its suggestions for .htaccess rules so I made sure to rip off the best bits.

Initially jQuery was being included, but given how far browsers have come in their JavaScript support, I was able to ditch it and streamline the JavaScript a bit.

Wherever possible, I made sure that background images in CSS were Base64 encoded as data URIs; icons, textures, and the like. That helped to reduce the number of HTTP requests—one of the easy wins for improving performance.

Then there’s the thorny issue of responsive images. The dConstruct 2012 site is similar to the dConstruct archive in that there is no correlation between browser width and image: quite often, a smaller image is required for wider screens than for narrower viewports because of the presence of a grid. So instead of trying to come up with some complex interplay of client and server cross-communication to figure out which size image would be appropriate to serve up, I instead took the same approach as I did for the archive site: optimise the hell out of images, regardless of whether they’re going to be viewed in a desktop or a mobile device.

Take a look at the original image of Kevin Slavin compared to the version that appears on the dConstruct archive. 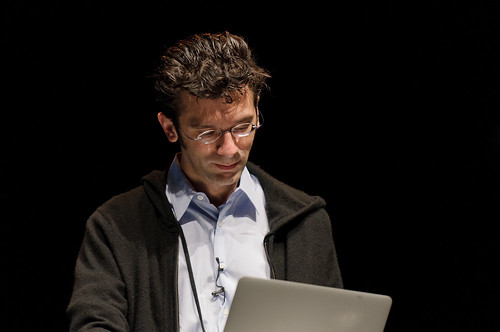 See how everything except the face is so much blurrier in the final version? That isn’t just an attempt to introduce some cool bokeh. It makes for much smaller JPGs with fewer jaggy artefacts. And because human beings tend to focus on other human faces, the technique isn’t really consciously noticeable (although you’ll notice it now that I’ve pointed it out to you).

The design of the 2012 dConstruct site called for monochrome images with colour filters applied.

That turned out to be a fortunate boon for optimising the images. This time we were using PNGs rather than JPGs and we were able to get the number of colours down to 32 or even 16. Run them through Image Optim or Smushit and you can squeeze even more bytes out of them.

The funny thing is that sweating the file sizes of images used to be part and parcel of web development. Back in the nineties, there was something of an aesthetic that grew out of the need to optimise images with limited (web-safe!) colour palettes. That was because bandwidth was at a premium and you could be pretty sure that plenty of people were accessing your site on slow connections.

Well, here we are fifteen years later and thanks to the rise of mobile, bandwidth is once again at a premium and we can be pretty sure that plenty of people are accessing our sites on slow connections. Yet again, mobile is highlighting issues that were always there. When did we get so lazy and decide it was acceptable to send giant unoptimised images down the pipe to our long-suffering visitors?

…it’s certainly true that the golden rule I grew up with – no page should ever be over 100Kb – has long since been mothballed.

But why? That seems like a perfectly good and still-relevant rule to me.

Alas, on the dConstruct site I wasn’t able to hit that target. With an unprimed cache, the home page comes in at around 300K (it’s 17K with a primed cache). By far the largest file is the CSS, weighing at 113K, followed by the web font, Futura bold oblique, at 32K.

By the way, when it comes to analysing performance in the browser, this missing manual for the Webkit inspector is really, really handy. I also ran the site through Google Page Speed but it seems that the user-agent chooses an arbitrary browser width (960? 1024?) so some of the advice about scaling images needs to be taken with a pinch of salt when applied to responsive designs.

I took a look at some other conference sites too. The beautiful site for the Build conference comes in at just under a megabyte for the homepage—it has quite a few fonts and images. It also has a monochrome aesthetic going on so I suspect quite a few of those images could be squeezed down (and some far-future expiry dates would help for repeat visitors).

Then there’s site for this year’s Mobilism conference which is blazingly fast. The combined file size on the homepage isn’t that different to the dConstruct site (although the CSS is significantly smaller) and I suspect there’s some server-side wizardry going on. I’ll have to corner Stephen at the conference next week and quiz him about it.

For now, server-side performance optimisation is something beyond my ken. I should really do something about that, especially as I’m expecting the dConstruct site to take a hammering the day that tickets go sale (May 29th—save the date).

In the meantime, there’s still plenty I can do on the front end. As Bruce put it:

It seems to me that old-fashioned, oh-so-dull techniques might not be ready for retirement yet. You know: well-crafted HTML, keeping JavaScript for progressive enhancement rather than a pre-requisite for the page even displaying, and testing across browsers.

All those optimisation techniques we learned in the 90s—and even wacky ideas like lowsrc—are back in fashion. Everything old is new again.

@adactio I love your “dConstruct optimisation” post and wanted to share it with my coworkers but some images are broken! adactio.com/journal/5439

16 years ago I wrote A new look for Spring

It’s the first of May, a day when workers the world over take a day off… except for web designers, like the very talented Nathan Borror, who use this day to launch their redesigned websites.

17 years ago I wrote Workers Of The World

18 years ago I wrote Tom Waits

With most of the music industry running scared from the Internet in a moral panic, it’s great to see a record company that embraces the medium and uses it to its full potential.

At the time of writing this, 997 morons believe this idiocy about The Lord Of The Rings:

18 years ago I wrote May Day - the Real Labor Day