Last week I described how I go about getting hold of mobile devices to test with at Clearleft. I finished by throwing open the door to any other web devs in Brighton who want to test on our devices:

We’ve always had an open-door policy here, so if you want to pop around, use our WiFi, and test on our devices, you’re more than welcome.

There was a great response from my fellow Brightonians offering to add some of their devices to the collection:

@adactio I have a Nokia N9 and a 3GS that I can share, if it’d be ok to leave them there?

@adactio @clearleft I’ve got a few phones that you don’t that I’m happy to leave in your capable hands. WP7, B2G, etc

Aegir popped ‘round yesterday and dropped off an iPhone 3GS and a very cute Nokia N9. 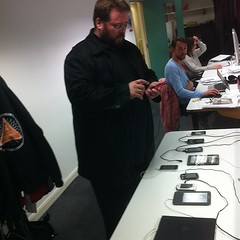 This morning I arrived in to the office to find that Aron had dropped off a Samsung Galaxy Tab.

This is great! Just by opening up the testing suite to everyone, it has now expanded beyond what I had been able to gather together by myself.

Josh has put together a page on the Clearleft site that we’ll keep updated with a list of the devices we’ve got.

We’ve ordered some nice stands for the phones so that we can clear away some of the cable clutter. We don’t want the experience of testing to be any more unpleasant than it needs to be. To that end, I’ve installed Adobe Shadow on the iOS and Android devices.

If you want to test a site that isn’t live yet, I find that services like showoff.io and localtunnel are handy for previewing local sites. Do bear in mind that these devices are intended for testing websites: if you want to install apps or update software, sorry; that’s not what the test lab is for.

If you’re based in Brighton, pop ‘round whenever you want to use our devices.

If you’re not based in Brighton, maybe you could kick-start a similar sharing scheme with a local company or co-working space. Belfast, Bristol, Manchester, Birmingham …you’ve got loads of smart geeks and I bet they’ve got plenty of devices they could be sharing.

“What’s the worst that could happen?” is really only valuable as a rhetorical question.

10 years ago I wrote Announcing HTML5 For Web Designers

I’ve only gone and written another bloody book.

11 years ago I wrote Dyson ball

When is a ball not a sphere?

16 years ago I wrote Prints charming

I have a new gadget.