The mind-blowing awesomeness of dConstruct 2012

Where do I start?

I could start by saying that dConstruct 2012 was one of the best days of my life. But let me back up a bit…

Here’s what I did last week:

That was just one week in the Brighton Digital Festival! And the weather was perfect the whole time—glorious sunshine.

I was really nervous on the day of Brighton SF. Like I said, I had no idea what I was doing. But I began to calm down right before the event.

I was sitting outside with Christopher Priest (I told him how much I liked Inverted World) and Joanne McNeil when the Brighton SF authors showed up, met one another, and started chatting. That’s when I knew everything was going to be fine.

The event was so good. Each of the authors were magnificently charismatic and captivating, the readings were absolutely enthralling, and I end up thoroughly enjoying myself.

Thank you for sending in questions for the authors. On the night, things were going so smoothly and time was flying by so fast, I actually didn’t get a chance to ask them …sorry.

It was a wonderful event and Drew very graciously agreed to record the audio so there’s going to be a podcast and a transcript available very soon. Watch this space.

When the day of dConstruct dawned, I was already in a good mood from Brighton SF. But nothing could have prepared me for what was to come.

I had the great honour and pleasure of introducing an amazing line-up of speakers. Seriously, every single speaker was absolutely superb. It was all killer, no filler.

Ben’s keynote set the scene perfectly. And boy, what a trooper! He really wasn’t a well chap, but with classic English stoicism and moustachioed stiff upper lip, he delivered the perfect opening for a day of playing with the future.

From there, it was just a non-stop delivery of brilliance from each speaker. After each talk, I kept using the words “awesome” and “mind-blowing”, but y’know what? They were awesome and mind-blowing! 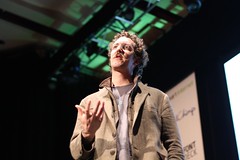 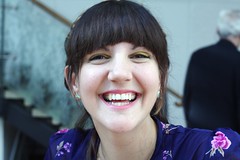 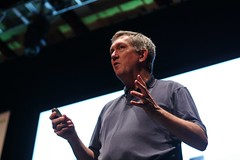 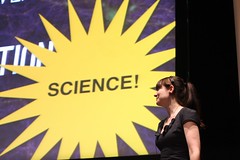 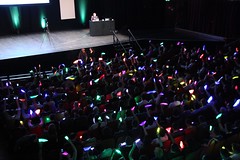 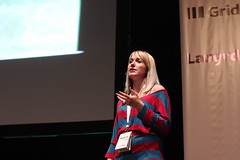 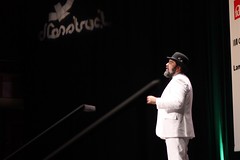 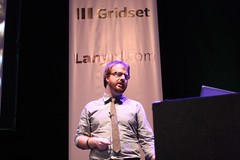 And at the end …James Burke. 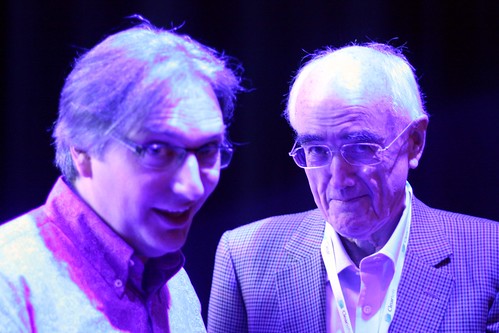 What can I say? I was really hoping it would be as good as an episode of Connections but what I got was like an entire season of Connections condensed into 45 minutes of brain-bending rapid-fire brilliance. It was mind-blowing. It was awesome. It broke my brain in the best possible way.

When James finished and the day was done, I was quite overcome. I was just so …happy! I had the privilege of hosting the smartest, most entertaining people I know. And I’m not just talking about the speakers.

At the after-party—and on Twitter—attendees told me just how much they enjoyed dConstruct 2012. I felt very happy, very proud, and kind of vindicated—it was something of a risky line-up and tickets were selling slower than in previous years, but boy, oh boy, that line-up really delivered the goods on the day.

Here’s one write-up of dConstruct. If you were there, I’d really appreciate it if you wrote down what you thought of the event. Drop me a line and point me to your blog post.

If you weren’t there …my commiserations. But here’s something that might serve as some consolation:

Thanks to Drew’s tireless work through the weekend, the audio from Friday’s conference is already online! Browse through the talks on the dConstruct archive or subscribe to a podcast of the talks on Huffduffer.

But you really had to be there.

9 years ago I wrote JavaScript jamboree

13 years ago I wrote Backnetworking

This is my honour roll: it was an honour to meet these people.

13 years ago I wrote Fables of the dConstruction

A whirlwind weekend of geeky goodness in Brighton.

15 years ago I wrote Farewell to Florida

It’s time for me to head back to Blighty. My stay in Saint Augustine wound up being longer than originally intended but there are worse places to be stranded for a few extra days.

I have my iBook back!