Oh, what a Responsive Day Out that was!

When I announced the Responsive Day Out just three months ago, I was at pains to point out that it wouldn’t be a typical Clearleft event:

It’s a kind of conference, I guess, but I think of it as more like a gathering of like-minded people getting together to share what they’ve learned, show some examples, swap techniques, and discuss problems. And all of it will be related to responsive web design.

Well, it all went according to plan. In fact, it surpassed all expectations. It was really, really, really good, thanks to the unstoppable quick-fire knowledge bombs being dropped by each and every amazing speaker.

In the run-up to the event, I kept telling the speakers not to prepare too much; after all, these would just be quick 20 minute talks, and they were all donating their time and expertise …but clearly they didn’t listen to me. Everyone brought their A-game.

At the excellent after-party, courtesy of the kind people of Gridset, lots of people said how much they liked the format. It’s one I shamelessly ripped off from Honor’s Improving Reality event—a batch of three quick, focused talks back-to-back, followed by a joint discussion with all three speakers, and some questions from the audience. I was playing host for the day, and I tried my best to keep things lighthearted and irreverent. From the comments I heard, I think I succeeded in bringing the tone down. 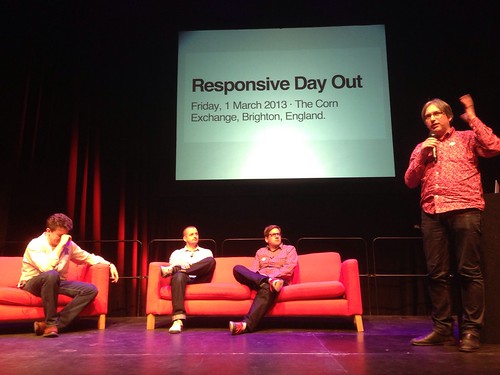 Despite the barebones, stripped-down nature of the event, there was good coffee on hand throughout, thanks to A Book Apart and Shopify.

In the meantime, Marc has posted a bunch of pictures on Flickr and Orde Saunders liveblogged the whole day.

If you came along, thank you. I hope you had a good time and enjoyed a day out at the seaside. Special thanks to the people who came from afar afield as Italy, Spain, and Belgium. I really appreciate it.

I really enjoyed myself, and I was relieved that the somewhat unorthodox gathering worked so well. But really, yesterday was a smash hit because of the speakers. Sarah, David, Tom, Richard, Josh, Laura, Elliot, Anna, Bruce, Andy, Owen, Paul, and Mark …you were all magnificent. Thank you, thank you, thank you!

11 years ago I wrote See me speak

16 years ago I wrote Going to the movies

Being Oscar season, this is normally the time for looking back at the films of the past year, singling out the best for praise and the worst for derision.

18 years ago I wrote Information Wants to Be Worthless

Here’s a great article by Bruce Sterling who’s going to be speaking at the South by Southwest festival in his native Austin.

18 years ago I wrote Cross-Platform Testing

There’s a new article up at A List Apart on cross-platform testing on the Mac.