I occasionally get sent some devices for the Clearleft device lab (which reminds me: thank you to whoever at Blackberry sent over the “Dev Alpha B” Blackberry 10). 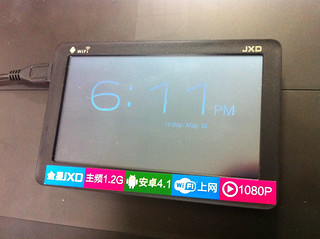 I had no idea who sent it. Was it a gaming device ordered by Anna?

The packaging was all in Chinese. Perhaps some foreign hackers were attempting to infiltrate our network through some clever social engineering.

It turns out that Rich had ordered it, having heard about it from Chris Heathcote who mentioned the device during his UX London talk.

It’s an S18 Mini Pad. You can pick one up for about £30. For that price, as Chris pointed out, you could just use it as an alarm clock (and it does indeed have an alarm clock app). But it’s also a touchscreen device with WiFi and a web browser …a really good web browser: it comes with Chrome. It’s an Android 4 device.

It has all sorts of issues. The touchscreen is pretty crap, for example. But considering the price, it’s really quite remarkable.

We’ve got to the point where all the individual pieces—WiFi, touchscreen, web browser, operating system—can be thrown together into one device that can be sold for around the thirty quid mark. And this is without any phone company subsidies.

Crap as it is, this device really excites me. A cheap mobile web-enabled device …I find that so much more thrilling than any Apple keynote.

13 years ago I wrote Redesigns a go-go

Suddenly everybody is spring cleaning their websites.

14 years ago I wrote The Empire Moves House

Moving house, one lego spaceship at a time.

15 years ago I wrote Missing the summit

I’ve had an absolutely great time in Alaska…

17 years ago I wrote Virtual Festival

Congratulations to Jessica and Richard, both of whom have been shortlisted in the "Best Personal Site and Weblogs" category of the Brighton & Hove Virtual Festival Awards.