I played truant from UX Week this morning to meet up with Mike for a coffee and a chat at Cafe Vega. We were turfed out when the bearded, baseball-capped, Draplinesque barista announced he had to shut the doors because he needed to “run out for some milk.” So we went around the corner to the Code For America office. The place had a layout similar to what we’ve got planned for the new Clearleft building so I immediately starting documenting it with pictures (although it probably looked like I was just trying to sneakily take pictures of Tim O’Reilly). 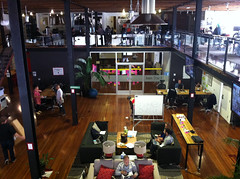 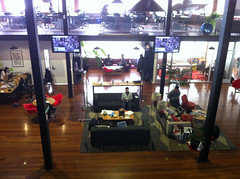 After catching up with Mike, I rendezvoused with Jessica back at the hotel and we headed out for lunch at Mel’s diner. The espresso milk shakes there are a must-have on any San Francisco trip I make. 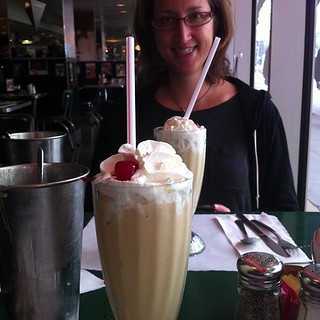 Then it was a race against time to try to get to the Mission Bay Conference Center to catch Sophia’s talk at UX Week. She ran the gist of the talk by me yesterday and it sounded great. Alas, I missed the first half of it, but what I caught was reaffirming much of what I was hammering home in my workshops yesterday.

UX Week wrapped up with the inimitable Ze Frank. As I said to Peter afterwards, he’s always reliable but never predictable.

Having said my goodbyes and my thanks to the lovely UX Week people, I met up with Jessica again for a feast of sushi at Hana Zen, right by the hotel. That’s three nights in a row that we’ve had really good asian cuisine downtown: Thai, Chinese, and Japanese.

We finished the evening in good company at the home of young Master Ben, observing the ritual of games night, sipping beers, and resisting the temptation of the cheese.

Tomorrow we depart for Chicago. Farewell, San Francisco; lovely to see you again, as always.

12 years ago I wrote Illinois apart

I’m going across the Atlantic again.

13 years ago I wrote Feedback

Send me an odeo.

15 years ago I wrote Wish you were here

I’m in the land of coral and sunshine: Key West, home to Hemingway, shipwrecks, six-toed cats, wild chickens and lots and lots of seafood,

This Wi-Fi finder is great for tracking down wireless networks at airports. They’re usually to be found in close proximity to the executive lounges.