Powers Of Ten is a remarkable short film created by Charles and Ray Eames in 1968. It deals with scale, going out to the distance of our galactic neighbourhood and down to the Planck measurement.

It all begins in a park in Chicago.

Ever since first seeing the film I thought it would be fun to find the exact spot around which the universe is explored by the Eameses. I also thought I probably wasn’t the first geek to think that. But my preliminary googling didn’t turn up any prior art. So I put the call out on Twitter:

Geocoders of the lazyweb: I’m trying to figure out the exact lat/lon coordinates of the Eames’ “Powers Of Ten” http://t.co/1lFnZAvm4V Go!

Within minutes, Matthew came through for me:

Although, as Dan pointed out, that opening shot was actually filmed in LA:

The actual live action of the picnic scene was filmed in Los Angeles, where Charles and Ray could oversee all aspects of production for the critical opening moments.

Nonetheless, armed with latitude and longitude coordinates, Jessica and I set out to find the one metre square patch of Chicago that’s used as the starting point for the film. We began the trek from our riverside hotel, stopping for an Intelligentsia coffee along the way, passing by the bean to take obligatory mirror shots, and through Millenium Park down to the Field Museum and the Schedd Aquarium, the perfect spot to stop for a Chicago-style hot dog. 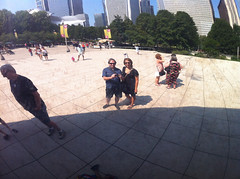 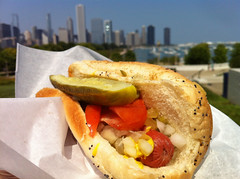 With a bit more walking, we made it to the lat/lon coordinates—a more arboreal location now than it was back when Powers Of Ten was filmed. I did what any self-respecting nerd in my situation would do: I made a new spot on Foursquare. 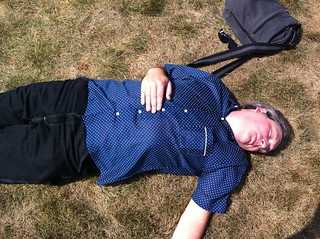 Mission accomplished. After that, we hopped on a water taxi back up to Navy Pier. This short boat ride made Jessica inordinately happy. It certainly was a lovely day to be out on the water. ‘Though I had to keep reminding myself that we were on a lake, not an ocean.

When we got back to our hotel, we asked at reception if there might be a riverside view that we could move to. There was and we did. Now when we look out of our hotel window, we can see the stunning architecture of downtown Chicago in all its glory. 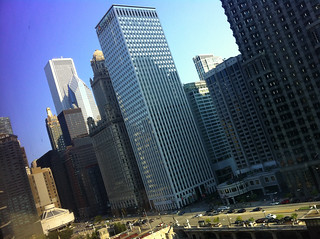 13 years ago I wrote dConstructing the network

17 years ago I wrote Signs

I was watching the trailer for the new M.Night Shyamalan film "Signs" which led to the website for the film.