Towards the end of each year, we Clearlefties head off to a remote location in the countryside for a week of hacking on non-client work. It’s all good unclean fun.

It started two years ago when we made Map Tales. Then last year we worked on the Politmus project. A few months back, it was the turn of Hackfarm 2013. 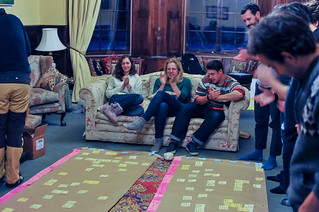 This time it was bigger than ever. Rather than having everyone working on one big project all week, it made more sense to split into smaller teams and work on a few different smaller projects. Ant has written a detailed description of what went down.

By the middle of the week, I found myself on a team with James, other James, Graham, and an Andy. We started working on something that Boxman has wanted for a while now: a simple little app for adding steps to a list of things to do.

Here’s what differentiates it from the many other to-do list apps out there: you start by telling it what time you want to be finished by. Then, after you’ve added all your steps, it tells you what time you need to get started. An example use case would be preparing a Sunday roast. You know all the steps involved, and you know what time you want to sit down to eat, so what time do you need start your preparation?

We call it Tiny Planner. It’s not “done” in any meaningful sense of the word, and let’s face it, it probably never will be. What happens at hackdays, stays at hackdays …unfinished. Still, the code is public if anyone fancies doing something with it. 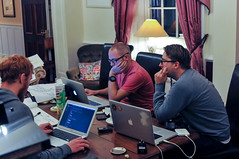 What made this project interesting from my perspective, was that it was one of them new-fangled single-page-app thingies. You know the kind: the ones that are made without progressive enhancement, and cease to exist in the absence of JavaScript. Exactly the kind of thing I would normally never work on, in other words.

It was …interesting. I though it would be a good opportunity to evaluate all the various JS-or-it-doesn’t-happen frameworks like Angular, Ember, and Backbone. So I started reading the documentation. I guess I hadn’t realised quite how stupid I am, because I couldn’t make any headway. It was quite dispiriting. So I left Graham to do all the hard JavaScript work and concentrated on the CSS instead. So much for investigating new technologies. 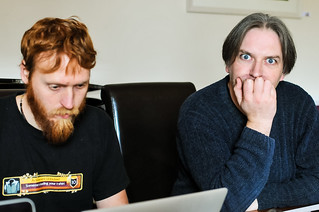 Partly because the internet connection at Hackfarm was so bad, we decided to reduce the server dependencies as much as possible. In the end, we didn’t need any server at all. All the data is stored in the browser in local storage. A handy side-effect of that is that we could offline everything—this may one of the few legitimate uses of appcache. Mind you, I never did get ‘round to actually adding the appcache component because, well, you know what it’s like with cache-invalidation and all that. (And like I said, the code’s public now so if it ever does get put into a presentable state, someone can add the offline stuff then.)

From a development perspective, it was an interesting experiment all ‘round; dabbling in client-side routing, client-side templating, client-side storage, client-side everything really. But it did feel …weird. There’s something uncanny about building something that doesn’t have proper URLs. It uses web technologies but it doesn’t really feel like it’s part of the web.

Anyway, feel free to play around with Tiny Planner, bearing in mind that it’s not a finished thing.

I should really put together a plan for finishing it. If only there were an app for that. 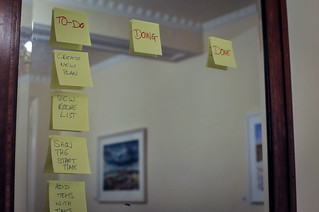 10 years ago I wrote The audio of place

There is no “there” there.

I’ll need to see some OpenID.

Begin the countdown to the book launch.

16 years ago I wrote Shooting the band

I spent the wee hours of last night honing my Photoshop chops.

18 years ago I wrote The Lord of the Rings : The Fellowship Of The Ring

I’m going to chime in pretty late in the day with my thoughts on The Fellowship Of The Ring.