It looks like graffiti artist Banksy was in Brighton recently. I spotted some of his work near the North Laine.

It’s nice to see that he hasn’t let the fame of doing a Blur album cover go to his head.

Still, he’s just like any other artist in his quest for fame. He took matters into his own hands at the Tate Britain recently:

"After several hours hanging next to a 19th century landscape, Banksy’s painting, entitled Crimewatch UK Has Ruined the Countryside For All of Us, crashed to the floor and the stunt was discovered." 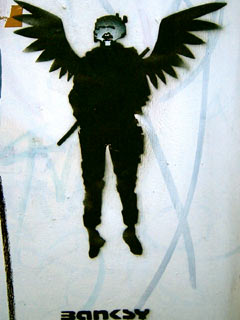 18 years ago I wrote A brush with fame

Chris (my upstairs neighbour and bandmate) had an interesting encounter this morning.