dConstruct is all done for another year. Every year I feel sort of dazed in the few days after the conference—I spend so much time and energy preparing for this event looming in my future, that it always feels surreal when it’s suddenly in the past.

But this year I feel particularly dazed. A little numb. Slightly shellshocked even.

This year’s dConstruct was …heavy. Sure, there were some laughs (belly laughs, even) but overall it was a more serious event than previous years. The word that I heard the most from people afterwards was “important”. It was an important event.

Here’s the thing: if I’m going to organise a conference in 2014 and give it the theme of “Living With The Network”, and then invite the most thoughtful, informed, eloquent speakers I can think of …well, I knew it wasn’t going to be rainbows and unicorns.

If you were there, you know what I mean. If you weren’t there, it probably sounds like it wasn’t much fun. To be honest, “fun” wasn’t the highest thing on the agenda this year. But that feels right. And even though it wasn’t a laugh-fest, it was immensely enjoyable …if, like me, you enjoy having your brain slapped around.

I’m going to need some time to process and unpack everything that was squeezed into the day. Fortunately—thanks to Drew’s typical Herculean efforts—I can do that by listening to the audio, which is already available!

Slap the RSS feed in your generic MP3 listening device of choice and soak up the tsunami of thoughts, ideas, and provocations that the speakers delivered.

Oh boy, did the speakers ever deliver! 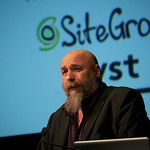 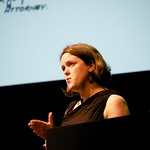 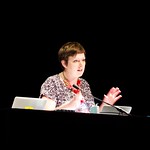 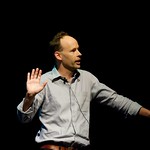 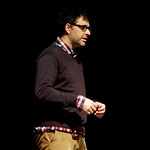 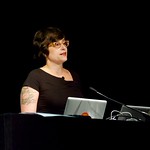 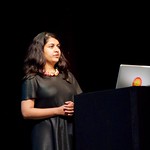 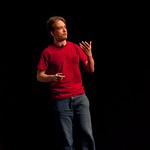 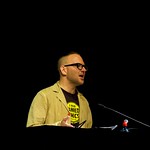 Listen, it’s very nice that people come along to dConstruct each year and settle into the Brighton Dome to listen to these talks, but the harsh truth is that I didn’t choose the speakers for anyone else but myself. I know that’s very selfish, but it’s true. By lucky coincidence, the speakers I want to see turn out to deliver the best damn talks on the planet.

That said, as impressed as I was by the speakers, I was equally impressed by the audience. They were not spoon-fed. They had to contribute their time, attention, and grey matter to “get” those talks. And they did. For that, I am immensely grateful. Thank you.

I’m not going to go through all the talks one by one. I couldn’t do them justice. What was wonderful was to see the emerging themes, ideas, and references that crossed over from speaker to speaker: thoughts on history, responsibility, power, control, and the future.

And yes, there was definitely a grim undercurrent to some of those ideas about the future. But there was also hope. More than one speaker pointed out that the future is ours to write. And the emphasis on history highlighted that our present moment in time—and our future trajectory—is all part of an ongoing amazing collective narrative.

But it’s precisely because the future is ours to write that this year’s dConstruct hammered home our collective responsibility. This year’s dConstruct was a grown-up, necessarily serious event that shined a light on our current point in history …and maybe, just maybe, provided some potential paths for the future.

Feeling like freshly stoked warrior of freedom, ready for battle against complacency. Bring on the future. Bring on the change. #dConstruct

That was a hard but rewarding #dconstruct. Dense and dark. Grown up, thoughtful, political.

Digging the how-I-learned-to-stop-worrying-and-love-the-dystopia vibes of every #dConstruct talk today. (Ir)rational responses to 2014.

This year's @dconstruct was a darker affair than usual, but given recent events, necessarily so. Lots to think about and digest. Inspiring.

Troubled by this year's @dconstruct. A definite undercurrent throughout. Totally unlike previous years.

I love how @dconstruct has been deliciously political.

Well, @adactio totally nailed it again with a fantastic @dconstruct. Brilliant, meaningful and wonderful talks. I will write something.

Left with more questions than answers. But in a good way. #dConstruct pic.twitter.com/gt1OYyXm2x

Struck by dissatisfactions with technology #dconstruct not much drum beating but warnings, ideas, and nods to history

Thanks @clearleft for provocative and hugely enjoyable #dConstruct - a truly great day.

attempting to write-up notes from @dConstruct - so many intriguing anecdotes and references - analysis cogs into overdrive! #allthepoints

Thanks and goodbye Brighton. @dConstruct was typically great, I had lots of fun, but am sad to leave & am considerably more thoughtful.

@dconstruct talks are always mindblowing, and even the most casual of conversations are memorable. Bye for now, Brighton!

At the station about to leave Brighton once more. #dConstruct was brilliant, I’m still trying to digest it all to be honest.

What a great event @dConstruct is. I’m feeling inspired and this mornings shower was particularly productive…

So glad I came to #dconstruct. Incredible talks

You know after you've read good dystopian sci-fi and you can't shake feeling both disturbed and educated in an important way? #dConstruct

The 'd' in this year's @dconstruct stands for dystopian.

We came, we saw, we communicated with machines.

6 years ago I wrote Testing webmentions

8 years ago I wrote Makers in Brighton

All the fun of the Maker Faire.

8 years ago I wrote dConstruction of the Fables

dConstruct 2011 was great …in my opinion.

13 years ago I wrote Simon and Paul

APIs are good for business.

15 years ago I wrote Storm chasing

If, like me, you have recently acquired hurricane fever, there’s a handy little freeware OS X application you might like. MegaTrack shows the current and projected paths of tropical storms using data from the National Oceanic and Atmospheric Adminst

17 years ago I wrote The Farmer's Market

There’s a farmer’s market once a month in the centre of Brighton.