As I mentioned earlier, I’ve been enjoying the extended edition DVD of The Two Towers. I’ve also previously made mention of the fact that I’ve been using my iSight as a webcam.

Combine the two and what do you get? A really boring webcam of me watching a DVD.

Okay, what if I move the camera around and point it towards the screen?

Ah, now that’s a far more interesting use of a webcam. Now I’m uploading a screengrab every thirty seconds.

I also make a point of updating my iChat status so that it mentions whatever movie I’m watching. That way, anybody who wants to can swing by my site and experiencing a truly inferior way of watching a movie: you have thirty seconds to silently contemplate one image from the film. Meanwhile, the action is moving on without you and when the image refreshes, you have to figure out what just happened.

Still, it might appeal to the calm, quiet type who doesn’t like their entertainment to be too action packed.

At the other extreme, you could archive each image and when the film is over, put them all together into a Quicktime movie. Actually, this is something that EvoCam does right out of the box.

The result is a super-fast edit of the entire movie - perfect for people who just don’t have time to sit still long enough for the movie’s actual length.

Who knows? In some cases, it might actually be an improvement. My Quicktime version of Solaris has a level of excitement that was missing from the DVD.

But all this raises an interesting question that Pete pointed out to me in an email: am I committing piracy?

Technically, I suppose I am. I guess I’ll have to actually read that blurb that scrolls up at the start of every DVD to find out for sure.

In the meantime, until the MPAA come knocking on my door, I’ll continue to have some iChat iSight EvoCam fun. 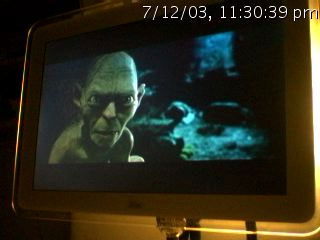 If, like me, you are subscribed to the {fray} mailing list, you’ll have received an email today pointing to a re-run of an old seasonal story - the tree:

Lance Arthur has his virtual Christmas card up already.