My friend Diarmaid has been over visiting from Ireland for the past few days.

I’ve been showing him the sights and sounds of Brighton (hence the lack of updates ‘round here). We’ve had afternoon tea at the Grand Hotel, a bracing walk along the beach in blustery weather, a stroll amongst the kitsch of the Palace Pier and the pavilion and a wander around the North Laine.

Diarmaid even got to meet the geeks at the post-SkillSwap drinkypoos in Grand Central on Monday evening.

Having exhausted Brighton’s tourist potential, I took Diarmaid up to the big smoke, mother London yesterday.

We had a stroll around the Tate Modern. I think the signal to noise ratio of the exhibits has improved a bit since I was last there. Diarmaid was particularly taken with The Weather Project.

As we were perusing the world of art indoors, the weather outside in the real world was steadily improving. By the time museum fatigue set in, it was a perfect day for a stroll along the south bank of the Thames.

I dutifully led my friend past all the tourist must-sees from the London Eye, past the Houses of Parliment, Big Ben and Westminster Abbey, through Whitehall, passing Downing Street, before emerging under Nelson’s Column at Trafalgar Square.

After a couple of seconds of standing in Trafalgar square watching people get their pictures taken with the statues of that most English of animals, the lion, Diarmaid turned to me and asked with a frown "where are all the pigeons?".

It turns out that the pigeons at Trafalgar Square were becoming something of a public health hazard. The mayor of London, Ken Livingstone, passed a by-law prohibiting the feeding of the birds. There was even a proposal to poison the pigeons but that prompted immediate public outrage.

In the end, an ingenious solution was found to keep pigeons out of Trafalgar Square by replacing an old tourist attraction with a new one: the square is patrolled daily by a young Harris Hawk.

A smart move by Red (in tooth and claw) Ken. 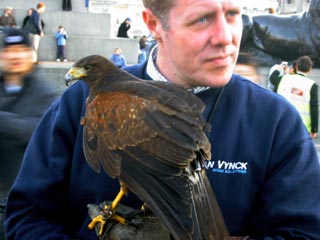 17 years ago I wrote Clutter

Today is my national holiday.

I’ve just spent a nice sunny Sunday at beautiful Bodiam Castle and I’ve got the pictures to prove it.