My last post might have given the impression that I’ve been doing nothing but programming lately. While it’s true that I have had some late nights, writing XSL files ‘till four in the morning, I also found the time for some R’n’R.

Last week I made an excursion to the pleasant village of Rodmell one evening. Jamie invited me out there to record some bouzouki for a new song his. The results should be available on his website before too long.

I also spent an evening in the company of fellow Brighton webmonkeys Andy and Richard. We met up in the WiFi-enabled Earth And Stars. We even managed to include Dunstan, late of San Francisco, in the conversation via iChat.

We talked, Richard and I browsed each other’s iTunes libraries, we drank the vaguely open-source sounding Freedom lager. It was this last activity that made me so susceptible to Andy’s suggestion of continued drinking at the (also WiFi-enabled) Spiegeltent.

As it turned out, I couldn’t get a WiFi signal inside. It’s not that I’m such a nerd that I wanted to surf the internet in the midst of drinking and dancing: it’s just that I wanted to iChat with Jessica to let her know why I would be late getting home. In lieu of iChat, I sent an SMS via bluetooth. 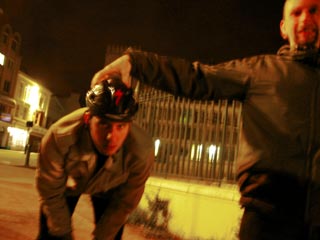 17 years ago I wrote Mackerel Fayre

Arr, there be some strange goings on in Brighton, m’lad. They do say there be a ghost ship riding the waves last last night. Arr!