Since arriving in Saint Augustine, my days have settled into quite a pleasant routine.

While my afternoons are spent checking out the sights and tourist attractions of the old town, I spend my mornings down on the beach, splashing in the warm Atlantic water and soaking up the sun. I’m not used to thinking of the Atlantic as being warm. The water that washes up on Brighton beach is cold enough to demasculate brass monkeys. It’s hard to believe that it’s the same ocean.

I’ve been making good use of my camera. Here are some pictures of the beach.

Those scenes of sunshine are about to be replaced by much wetter, windier images. It looks as though my idyllic routine is about to be interrupted. Hurricane Frances is headed towards Florida.

Jessica and I discussed the possibility of trying to get an earlier flight back to the UK but we’ve decided to stick it out here. In fact, given the strong likelihood of delays and cancellations, we’ll probably end up staying longer than originally anticipated.

Time to batten down the hatches. We’ll have to spend tomorrow boarding up the beach house but we have a sound evacuation plan. Jessica’s great aunt lives further inland in a sturdy house on high ground. We have candles, food and some good books. I’ve also got my mandolin with me (so that’s the firewood problem solved then).

I reckon we’ll do just fine even though we haven’t stocked up on hurricane bacon. 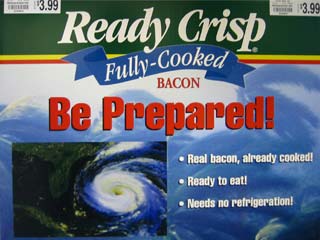 16 years ago I wrote Missing Skillswap

I’ve been struck low by a cold, all sniffles and blocked nose. That’s why I wasn’t able to make it to last night’s Skillswap talk by Rosie Freshwater on Search Engine Optimisation.

17 years ago I wrote CrashBonsai

17 years ago I wrote Cre@teOnline update

MediumBold have put together a wonderful site examining the evolution of type from pictograms on cave walls to Joe Gillespie’s pixel fonts.