I’m sure I’ve mentioned before that Jamie, head-honcho at Message, has a brother who is a famous act-ohr.

Martin has finished principle photography on the forthcoming film version of The Hitchhiker’s Guide To The Galaxy. He plays Arthur Dent. The film also stars Sam Rockwell, Bill Nighy and John Malkovich.

Nobodies, the lot of ‘em.

They are, however, very privileged to be acting alongside a true icon of the silver screen. The part of Marvin, the paranoid android, is being ably played by Warwick Davis. Yes, THE Warwick Davis.

He may be more easily recognisable from his role in Willow but to me, he will always be Wicket the Ewok.

Needless to say, ever since I found out that I was two degrees of separation away from my childhood icon, I’ve been bugging Jamie to secure me an autograph. Jamie bugged his brother who secured the autograph then lost it, then found it, then lost it again. Finally, Warwick Davis himself sent a new autograph in the post straight to the Message office.

I am now the proud owner of a glossy 8" x 10" photo signed in English and Ewokese. Now I just need to get a frame. 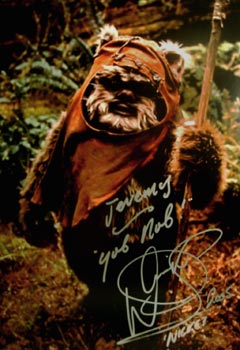 17 years ago I wrote A gallery of travellery

As I prepare for my next ‘plane trip, I thought I’d share these pictures of an airplane journey.

17 years ago I wrote Northwards

Jessica and I are headed to Seattle.

18 years ago I wrote Sheer tastlessness

This banner ad is shocking for two reasons.