It was only last week that myself and Ellen were brainstorming ideas for a combined workshop. Our enthusiasm got the better of us, and we said “Let’s just do it!” Before we could think better of it, the room was booked, and the calendar invitations were sent. 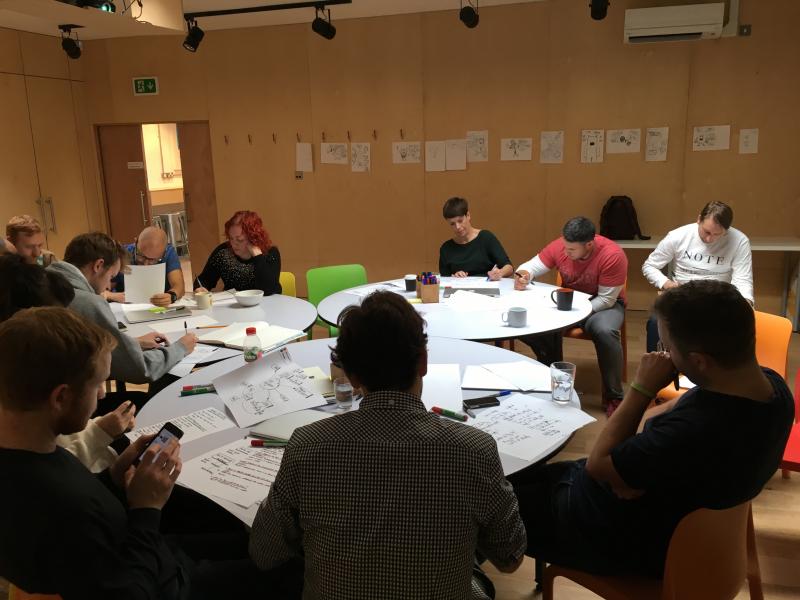 The topic was “story.”

No wait, maybe it was …”narrative.”

That’s not quite right either.

Basically, here’s the issue: at some point everyone at Clearleft needs to communicate something by telling a story. It might be a blog post. It might be a conference talk. It might be a proposal for a potential client. It might be a case study of our work. Whatever form it might take, it involves getting a message across …using words. Words are hard. We wanted to make them a little bit easier.

We did two workshops. Ellen’s was yesterday. Mine was today. They were both just about two hours in length.

Get out of my head!

Ellen’s workshop was all about getting thoughts out of your head and onto paper. But before we could even start to do that, we had to confront our first adversary: the inner critic.

You know the inner critic. It’s that voice inside you that says “You’ve got nothing new to say”, or “You’re rubbish at writing.” Ellen encouraged each of us to drag this inner critic out into the light—much like Paul Ford did with his AnxietyBox. 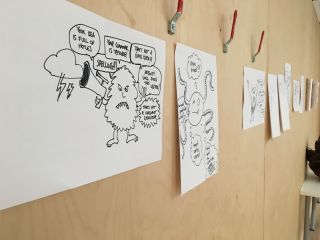 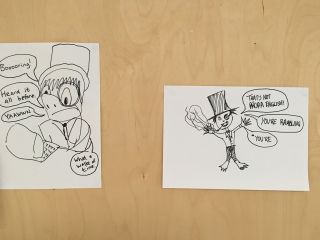 In a bizarre coincidence, Chloe and I had exactly the same inner critic, complete with top hat and monocle.

With that foe vanquished, we proceeded with a mind map. The idea was to just dump everything out of our heads and onto paper, without worrying about what order to arrange things in.

I found it to be an immensely valuable exercise. Whenever I’ve tried to do this before, I’d open up a blank text file and start jotting stuff down. But because of the linear nature of a text file, there’s still going to be an order to what gets jotted down; without meaning to, I’ve imposed some kind of priority onto the still-unformed thoughts. Using a mind map allowed me get everything down first, and then form the connections later. 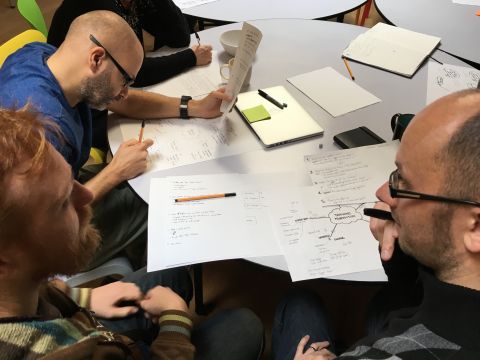 There were plenty of other exercises, but the other one that really struck me was a simple framework of five questions. Whatever it is that you’re trying to say, write down the answers to these questions about your audience:

They’re straightforward questions, but the answers can really help to make sure you’re covering everything you need to.

There were many more exercises, and by the end of the two hours, everyone had masses of raw material, albeit in an unstructured form. My workshop was supposed to help them take that content and give it some kind of shape.

The structure of stories

Ellen and I have been enjoying some great philosophical discussions about exactly what a story is, and how does it differ from a narrative structure, or a plot. I really love Ellen’s working definition: Narrative. In Space. Over Time.

This led me to think that there’s a lot that we can borrow from the world of storytelling—films, novels, fairy tales—not necessarily about the stories themselves, but the kind of narrative structures we could use to tell those stories. After all, the story itself is often the same one that’s been told time and time again—The Hero’s Journey, or some variation thereof.

So I was interested in separating the plot of a story from the narrative device used to tell the story.

To start with, I gave some examples of well-known stories with relatively straightforward plots:

I asked everyone to take a story (either from that list, or think of another one) and write the plot down on post-it notes, one plot point per post-it. Before long, the walls were covered with post-its detailing the plot lines of:

Okay. That’s plot. Next we looked at narrative frameworks. 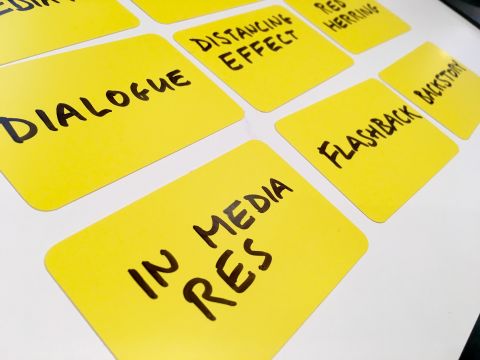 Begin at a crucial moment, then back up to explain how you ended up there.

Instead of describing the action directly, have characters tell it to one another.

e.g. The Dialogues of Plato …or The Breakfast Club (or one of my favourite sci-fi short stories).

Begin in the middle of the action. No exposition allowed, but you can drop hints.

e.g. Mad Max: Fury Road (or Star Wars, if it didn’t have the opening crawl).

Begin with a looooong zooooom into the past before taking up the story today.

Just the facts with no embellishment.

You get the idea.

In a random draw, everyone received a card with a narrative device on it. Now they had to retell the story they chose using that framing. That led to some great results:

Once everyone had the hang of it, I asked them to revisit their mind maps and other materials from the previous day’s workshop. Next, they arranged the “chunks” of that story into a linear narrative …but without worrying about getting it right—it’s not going to stay linear for long. Then, everyone is once again given a narrative structure. Now try rearranging and restructuring your story to use that framework. If something valuable comes out of that, great! If not, well, it’s still a fun creative exercise.

And that was pretty much it. I had no idea what I was doing, but it didn’t matter. It wasn’t really about me. It was about helping others take their existing material and play with it.

That said, I’m glad I finally got this process out into the world in some kind of semi-formalised way. I’ve been preparing talks and articles using these narrative exercises for a while, but this workshop was just the motivation I needed to put some structure on the process.

I think I might try to create a proper deck of cards—along the lines of Brian Eno’s Oblique Strategies or Stephen Andersons’s Mental Notes—so that everyone has the option of injecting a random narrative structural idea into the mix whenever they’re stuck.

At the very least, it would be a distraction from listening to that pesky inner critic.

An eloquent account of our two story forming content workshops that ‘just kind of happened’ by @adactio adactio.com/journal/9732

Writing with an audience in mind: adactio.com/journal/9732

Some interesting thoughts on creating narratives as a group workshop: adactio.com/journal/9732 @adactio @jrhusney

I very much enjoyed this entry via @adactio’s on a Storyforming workshop. All of the links within are fantastic too: adactio.com/journal/9732

Defeating the inner critic with narrative trickery by @adactio. lt10.co/1QwwqxO

YES. > at some point everyone at Clearleft needs to communicate something by telling a story.adactio.com/journal/9732

Thanks so much! Just bookmarked :) Here is an example of an interview with Dan Ariely: uxchat.me/user-experienc… can I DM you for q?

Sure. Or you can email me: jeremy at adactio dot com

Ooh I love this! Jessica Abel’s been doing a similar exercise with her students and The Should Monster: jessicaabel.com/2017/07/17/wha…

(This one, by Sarah Leavitt, is my absolute favorite.)

11 years ago I wrote Audio ga-ga

Safari is being a bit too clever with the audio element from HTML5.

13 years ago I wrote Taking back the Web

A grandiose title for a cosy unconference.

18 years ago I wrote Ireland

Jessica and I went to Ireland earlier this year. We spent most of the time in my hometown of Cobh.