I took some time out yesterday to attend a little literary event. The authors Rupert Thomson and Andrew Miller were speaking and reading at The Old Market, which is right at the end of my street.

I know Andy and I’ve read his Booker-nominated Oxygen. I wasn’t familiar with Rupert Thomson’s work. I intend to become more familiar with it. I bought his new book, Divided Kingdom, after hearing him read the first few pages.

The reading was enjoyable but it was the speaking that really held my interest. The two authors chatted about their respective writing processes.

Both writers said they did very little planning or outlining for their books. They did plenty of research but they certainly didn’t wireframe the plot or the characters. Rupert Thomson likened to process to sculpture, carving away at a block until something emerges.

With a process like that, there can be plenty of dead ends. There were nine very different drafts of Divided Kingdom before the final novel emerged.

During the question and answer session, I asked what seemed to me to be the most pertinent question:

"How do you know when you’re done?"

There’s no quantifiable answer, of course. The secret is knowing when to stop. If you go too far with a sculpture, you might chip away until nothing is left.

It was quite gratifying to get an insight into the creative process from a discipline other than web design. At heart, the disciplines aren’t all that different. Both of them exhibit a 99 percentile in the perspiration to inspiration ratio.

I wish I could just design something great straight off the bat. It never seems to work that way. Instead, I have to pay my dues by investigating and discarding countless design directions. It’s usually right at the point when I’m ready to give up that something clicks and I suddenly "get it". It’s then I know that I’ve found the right design (strange that I would call it "finding" the right design… as if I didn’t create the design myself).

My design process isn’t the fastest. I usually end up with a folder full of discarded Photoshop files. But I know that, without those dead ends, I never would have arrived at the final destination.

This process had never been a problem until recently. I was working for a client on an hourly basis. The client questioned the hours listed on the invoice that I claimed to have worked. Looking at the final design I had produced, he couldn’t see where the time had been invested. I offered to show him my folder of discarded designs but he didn’t seem interested.

I think my process might be similar to what Jeff Veen calls blinking out design:

"The problem, of course, is doing this commercially - doing it on cue. How do you write a proposal that suggests that I’m going to "do a tremendous amount of homework, then just wait for the answer. Oh, and it’s going to be really, really painful as we wait. Really painful. Sorry.""

Listening to the two writers describing their craft, I realised that my process wasn’t anomalous. 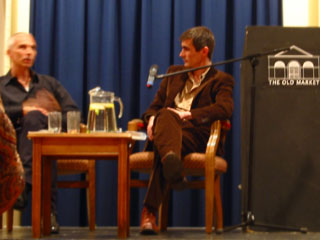 I’ve been trying to get my hands on some airport cards for my Macs for quite some time now. I kept going into the local Apple supplier and pestering them.