One of the topics I enjoy discussing at Indie Web Camps is how we can use design to display activity over time on personal websites. That’s how I ended up with sparklines on my site—it was the a direct result of a discussion at Indie Web Camp Nuremberg a year ago:

Perhaps the most interesting visual example of my activity over time is on my Github profile. Halfway down the page there’s a calendar heatmap that uses colour to indicate the amount of activity. What I find interesting is that it’s using two axes of time over a year: days of the month across the X axis and days of the week down the Y axis.

I wanted to try something similar, but showing activity by time of day down the Y axis. A month of activity feels like the right range to display, so I set about adding a calendar heatmap to monthly archives. I already had the data I needed—timestamps of posts. That’s what I was already using to display sparklines. I wrote some code to loop over those timestamps and organise them by day and by hour. Then I spit out a table with days for the columns and clumps of hours for the rows. 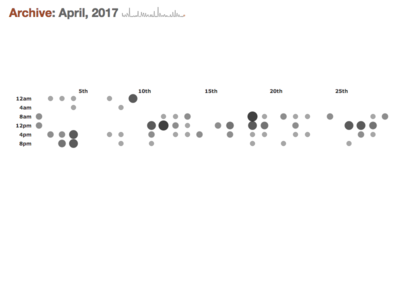 I’m using colour (well, different shades of grey) to indicate the relative amounts of activity, but I decided to use size as well. So it’s also a bubble chart.

It doesn’t work very elegantly on small screens: the table is clipped horizontally and can be swiped left and right. Ideally the visualisation itself would change to accommodate smaller screens.

Still, I kind of like the end result. Here’s last month’s activity on my site. Here’s the same time period ten years ago. I’ve also added month heatmaps to the monthly archives for my journal, links, and notes. They’re kind of like an expanded view of the sparklines that are shown with each month.

From one year ago, here’s the daily distribution of

And then here’s the the daily distribution of everything in that month all together.

I realise that the data being displayed is probably only of interest to me, but then, that’s one of the perks of having your own website—you can do whatever you feel like.

I was in Nuremberg last weekend for Indie Web Camp. It was great.

At some point I really should stop being surprised by just how much gets done in one weekend, but once again, I was blown away by the results.

On the first day we had very productive BarCamp-like discussion sessions, and on the second day it was heads-down hacking. But it was hacking with help. Being in the same room as other people who each have their own areas of expertise is so useful. It really turbo-charges the amount that you can get accomplished.

For example, I was helping Tom turn his website into a progressive web app with the addition of a service worker and a manifest file. Meanwhile Tom was helping somebody else get a Wordpress site up and running.

Actually, that was what really blew me away: two people began the second day of Indie Web Camp Nuremberg without websites and by the end of the day, they both had their own sites up and running. For me, that’s the real spirit of the indie web—I know we tend to go on about the technologies like h-card, h-entry, webmentions, micropub, and IndieAuth, but really it’s not about the technologies; it’s about having your own place on the web so that you have control over what you put out in the world.

For my part, I was mostly making some cosmetic changes to my site. There was a really good discussion on the first page about home pages. What’s the purpose of a home page? For some, it’s about conveying information about the person. For others, it’s a stream of activity.

My site used to have a splash-like homepage; just a brief bio and a link to the latest blog post. Then I changed it into a stream a few years ago. But that means that the home page of my site doesn’t feel that different from sections of the site like the journal or the link list.

I decided I’d add signs of life to my home page. Once again, I reached for my favourite little data visualisation helper: sparklines

A sparkline is a small intense, simple, word-sized graphic with typographic resolution.

I’ve already got sparklines on Huffduffer and on The Session so I suppose it was only a matter of time before they showed up here. 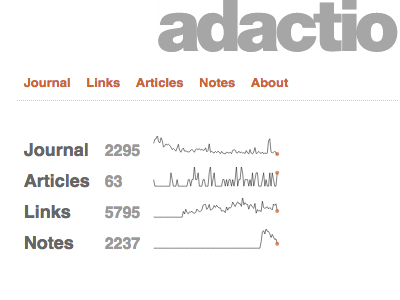 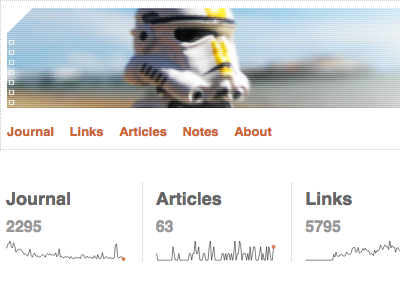 I’ve been tweaking them ever since I got back from Germany. Now I’ve added in a little h-card bio as well. 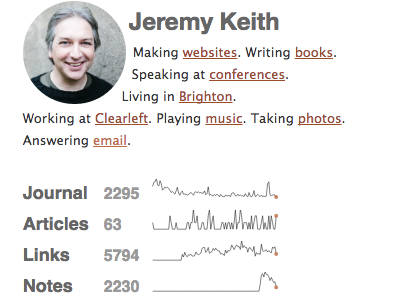 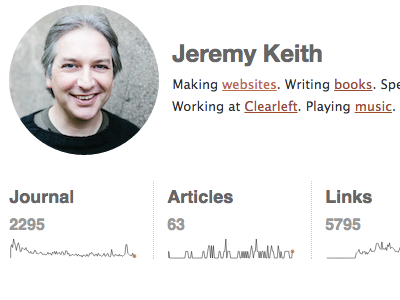 Initially I was using the fantastic little scripted SVG that Stuart made , the same one that I’m using on Huffduffer and The Session. But Kevin pointed out that a straightforward polyline would be more succinct. And in the case of my own site, there’s only four sparklines so it wouldn’t be a huge overhead to hard-code the values straight into the SVGs.

Yesterday was the first day of Render Conference in Oxford (I’ll be speaking later today). Sara gave a blisteringly great talk on (what else?) SVGs and I got so inspired I started refactoring my code right there and then. I’m pretty happy with how the sparklines are working now, although I’m sure I’ll continue to play around with them some more.

There’s another activity visualisation that I’m eager to play around with. I really like the calendar heatmap on my Github profile. I could imagine using something like that for an archive view on my own site.

Luckily for me, I’ll have a chance to play around with my website a bit more very soon. There’s going to be another Indie Web Camp in Germany very soon.

Indie Web Camp Düsseldorf will take place on May 7th and 8th, right before Beyond Tellerrand. Last year’s event was really inspiring. If there’s any chance you can make it, you should come along. You won’t regret it.