What a day that was

I woke up in Geneva. The celebrations to mark the 30th anniversary of the World Wide Web were set to begin early in the morning.

It must be said, March 12th 1989 is kind of an arbitrary date. Maybe the date that the first web page went online should mark the birth of the web (though the exact date might be hard to pin down). Or maybe it should be August 6th, 1991—the date that Tim Berners-Lee announced the web to the world (well, to the alt.hypertext mailing list at least). Or you could argue that it should be April 30th, 1993, the date when the technology of the web was officially put into the public domain.

In the end, March 12, 1989 is as good a date as any to mark the birth of the web. The date that Tim Berners-Lee shared his proposal. That’s when the work began.

Exactly thirty years later, myself, Martin, and Remy are registered and ready to attend the anniversay event in the very same room where the existence of the Higgs boson was announced. There’s coffee, and there are croissants, but despite the presence of Lou Montulli, there are no cookies. 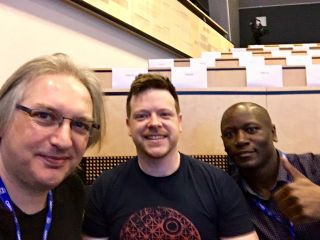 The doors to the auditorium open and we find some seats together. The morning’s celebrations includes great panel discussions, and an interview with Tim Berners-Lee himself. In the middle of it all, they show a short film about our hack week recreating the very first web browser.

It was surreal. There we were, at CERN, in the same room as the people who made the web happen, and everyone’s watching a video of us talking about our fun project. It was very weird and very cool.

Afterwards, there was cake. And a NeXT machine—the same one we had in the room during our hack week. I feel a real attachment to that computer. 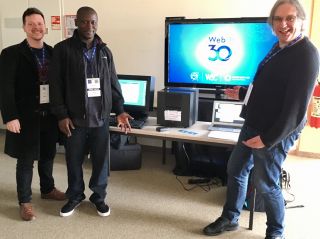 We chatted with lots of lovely people. I had the great pleasure of meeting Peggie Rimmer. It was her late husband, Mike Sendall, who gave Tim Berners-Lee the time (and budget) to pursue his networked hypertext project. Peggie found Mike’s copy of Tim’s proposal in a cupboard years later. This was the copy that Mike had annotated with his now-famous verdict, “vague but exciting”. Angela has those words tattooed on her arm—Peggie got a kick out of that.

Eventually, Remy and I had to say our goodbyes. We had to get to the airport to catch our flight back to London. Taxi, airport, plane, tube; we arrived at the Science Museum in time for the evening celebrations. We couldn’t have been far behind Tim Berners-Lee. He was making a 30 hour journey from Geneva to London to Lagos. We figured seeing him at two out of those three locations was plenty. 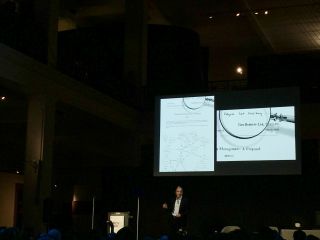 By the end of the day we were knackered but happy. The day wasn’t all sunshine and roses. There was a lot of discussion about the negative sides of the web, and what could be improved. A lot of that was from Sir Tim itself. But mostly it was a time to think about just how transformative the web has been in our lives. And a time to think about the next thirty years …and the web we want.

I’m back at CERN.

I’m back at CERN because tomorrow, March 12th, 2019, is exactly thirty years on from when Tim Berners-Lee submitted his original “vague but exciting” Information Management: A Proposal. Tomorrow morning, bright and early, there’s an event at CERN called Web@30.

Thanks to my neglibable contribution to the recreation of the WorldWideWeb browser, I’ve wrangled an invitation to attend. Remy and Martin are here too, and I know that the rest of the team are with us in spirit.

I’m so excited about this! I’m such a nerd for web history, it’s going to be like Christmas for me.

If you’re up early enough, you can watch the event on a livestream. The whole thing will be over by mid-morning. Then, Remy and I will take an afternoon flight back to England …just in time for the evening event at London’s Science Museum.