After a fun and productive Indie Web Camp, I stuck around Düsseldorf for Beyond Tellerand. I love this event. I’ve spoken at it quite a few times, but this year it was nice to be there as an attendee. It’s simultaneously a chance to reconnect with old friends I haven’t seen in a while, and an opportunity to meet lovely new people. There was plenty of both this year.

I think this might have been the best Beyond Tellerrand yet, and that’s saying something. It’s not just that the talks were really good—there was also a wonderful atmosphere.

Marc somehow manages to curate a line-up that’s equal parts creativity and code; design and development. It shouldn’t work, but it does. I love the fact that he had a legend of the industry like David Carson on the same stage as first-time speaker like Dorobot …and the crowd loved ‘em equally!

During the event, I found out that I had a small part to play in the creation of the line-up…

Three years ago, I linked to a video of a talk by Mike Hill:

A terrific analysis of industrial design in film and games …featuring a scene-setting opening that delineates the difference between pleasure and happiness.

Marc saw my link, watched the video, and decided he wanted to get Mike Hill to speak at Beyond Tellerrand. After failing to get a response by email, Marc managed to corner Mike at an event in Amsterdam and get him on this year’s line-up.

Mike gave a talk called The Power of Metaphor and it’s absolutely brilliant. It covers the monomyth (the hero’s journey) and Jungian archetypes, illustrated with the examples Star Wars, The Dark Knight, and Jurassic Park:

Under the surface of their most celebrated films lies a hidden architecture that operates on an unconscious level; This talk is designed to illuminate the techniques that great storytellers use to engage a global audience on a deep and meaningful level through psychological metaphor.

The videos from Beyond Tellerrand are already online so you can watch the talk now.

Mike’s talk was back-to-back with a talk from Carolyn Stransky called Humanising Your Documentation:

In this talk, we’ll discuss how the language we use affects our users and the first steps towards writing accessible, approachable and use case-driven documentation.

While the talk was ostensibly about documentation, I found that it was packed full of good advice for writing well in general.

I had a thought. What if you mashed up these two talks? What if you wrote documentation through the lens of the hero’s journey?

Think about it. When somone arrives at your documentation, they’ve crossed the threshold to the underworld. They are in the cave, facing a dragon. You are their guide, their mentor, their Obi-Wan Kenobi. You can help them conquer their demons and return to the familiar world, changed by their journey.

Amber and I often have meta conversations about the nature of learning and teaching. We swap books and share ideas and experiences whenever we’re trying to learn something or trying to teach something. A topic that comes up again and again is the idea of “the curse of knowledge“—it’s the focus of Steven Pinker’s book The Sense Of Style. That’s when the author/teacher can’t remember what it’s like not to know something, which makes for a frustrating reading/learning experience.

This is one of the reasons why I encourage people to blog about stuff as they’re learning it; not when they’ve internalised it. The perspective that comes with being in the moment of figuring something out is invaluable to others. I honestly think that most explanatory books shouldn’t be written by experts—the “curse of knowledge” can become almost insurmountable.

I often think about this when I’m reading through the installation instructions for frameworks, libraries, and other web technologies. I find myself put off by documentation that assumes I’ve got a certain level of pre-existing knowledge. But now instead of letting it get me down, I use it as an opportunity to try and bridge that gap.

The brilliant Safia Abdalla wrote a post a while back called How do I get started contributing to open source?. I definitely don’t have the programming chops to contribute much to a codebase, but I thoroughly agree with Safia’s observation:

If you’re interested in contributing to open source to improve your communication and empathy skills, you’re definitely making the right call. A lot of open source tools could definitely benefit from improvements in the documentation, accessibility, and evangelism departments.

What really jumps out at me is when instructions use words like “simply” or “just”. I’m with Brad:

“Just” makes me feel like an idiot. “Just” presumes I come from a specific background, studied certain courses in university, am fluent in certain technologies, and have read all the right books, articles, and resources. “Just” is a dangerous word.

But rather than letting that feeling overwhelm me, I now try to fix the text. Here are a few examples of changes I’ve suggested, usually via pull requests on Github repos:

They all have different codebases in different programming languages, but they’re all intended for humans, so having clear and kind documentation is a shared goal.

I like suggesting these kinds of changes. That initial feeling of frustration I get from reading the documentation gets turned into a warm fuzzy feeling from lending a helping hand.

I was nervous as hell before my talk at An Event Apart Seattle. I don’t normally get quite so nervous but it was a new talk and also …it’s An Event Apart! They set a very, very high bar.

Once I got on stage though, I just started geeking out. I was talking about design principles, a subject I find fascinating. I’m hoping that some of my enthusiasm for the subject helped make for a compelling presentation.

It was a whirlwind tour, starting with a long-zoom look at design principles in history before moving on to the web, where I took an up-close-and-personal look at CSS and quite a bit of HTML, before pulling back again to talk about our planet, our solar system and our galaxy. Yes, there was a space elevator.

I mentioned a range of people, organisations and projects that have documented their design principles, but rather than fill up the slides with lots of URLs, I gave just one URL at the start (and end) of the talk:

That’s where I gathering today examples of documented design principles. By “documented” I mean “published on the web.” There are some really interesting principles from disciplines like urban design but as long as they are locked up in books that aren’t addressable on the network, I can’t link to them.

This is a fairly small-scale project so I figured a wiki might be overkill but if you know of any good documented design principles that should be added to the list, let me know 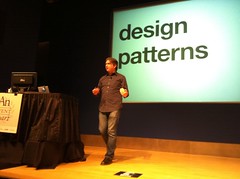 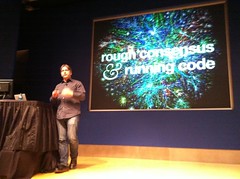