If I can do it, anyone can. And anyone should.

Later that year, Ariel organised a Science Hack Day in Palo Alto at the Institute For The Future. It was magnificent. Since then, Ariel has become a tireless champion and global instigator of Science Hack Day, spreading the idea, encouraging new events all over the world, and where possible, travelling to them. I just got the ball rolling—she has really run with it.

She organised another Science Hack Day in San Francisco for last weekend and I was lucky enough to attend—it coincided nicely with my travel plans to the States for An Event Apart in Austin. Once again, it was absolutely brilliant. There were tons of ingenious hacks, and the attendees were a wonderfully diverse bunch: some developers and designers, but also plenty of scientists and students, many (perhaps most) from out of town. 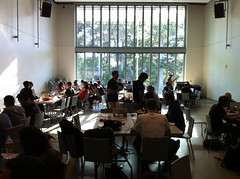 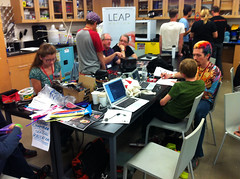 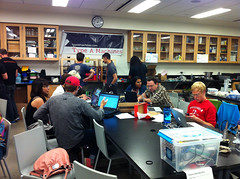 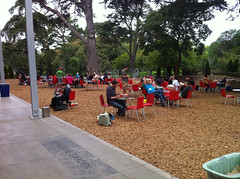 But best of all was the venue: The California Academy of Sciences. It’s a fantastic museum, and after 5pm—when the public left—we had the place to ourselves. Penguins, crocodiles, a rainforest, an aquarium …it’s got it all. I didn’t get a chance to do all of the activities that were provided—I was too busy hacking or helping out—like stargazing on the roof, or getting a tour of the archives. But I did make it to the private planetarium show, which was wonderful. 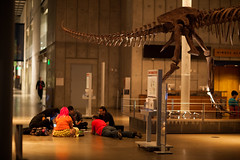 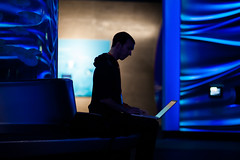 The Science Hackers spent the night, unrolling their sleeping bags in all the nooks and crannies of the aquarium and the African hall. It was like being a big kid. Mind you, the fun of sleeping over in such a great venue was somewhat tempered by the fact that trying to sleep in a sleeping bag on just a yoga mat on a hard floor is pretty uncomfortable. I was quite exhausted by day two of the event, but I powered through on the wave of infectious enthusiasm exhibited by all the attendees. 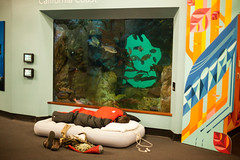 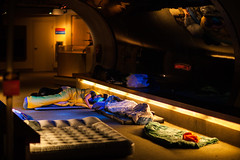 Then when it came time to demo all the hacks …well, I was blown away. So much cool stuff.

Ariel and her team really outdid themselves. I’m so happy I was able to make it to the event. If you get the chance to attend a Science Hack Day, take it. And if there isn’t one happening near you, why not organise one? Ariel has put together a handy checklist to get you started so you can get excited and make things with science.

I’m still quite amazed that this was the 24th Science Hack Day! When I organised the first one three years ago, I had no idea that it could spread so far, but thanks to Ariel, it has become a truly special phenomenon.

I’m living inside Keynote these days. I’ve got a string of speaking engagements coming up and I’m freaking out about all of them.

The big one is the full-day dConstruct workshop I’ll be leading called Responsive Enhancement. I’ve been working on it solidly for the last month and I hope that it’s all going to come together this week. I’m quite excited about it. If anything, my concern is that there won’t be enough time in one day to cover all the things I want to geek about.

Lest you think that is a blatant plug to entice you to book a place on the workshop, that ship has sailed, my friend: the workshop sold out a while back. But you can still book a place on Scott’s jQuery Mobile workshop or Josh’s Mobile Design workshop. And remember, a workshop ticket gets you complementary access to the dConstruct conference (which sold out in a day).

Maker Faire Brighton will take place the day after dConstruct but I’ll probably be too busy making frantic last-minute preparations for Aral’s Update conference at the Brighton Dome two days later. I’ve been invited to deliver an 18 minute rant and permission has been granted for me to be as controversial as I wish. I’ll try not to disappoint. Tickets are still available if you want a piece of the action.

Later that week I’ll be up in London for the Adobe Expressive Web Tour. In this case, I haven’t explicitly asked permission to rant but I’m going to do so anyway. Hey, if you’re going to ask me to give a talk called “The State of the Web” in the same month that you dump Adobe Muse on the world, you’ve gotta expect some flak, right?

Then I’ll be flying out to Nashville for the Breaking Development conference which kicks off on September 12th. I’m feeling distinctly outclassed by the ludicrously smart line-up of talent that will be presenting there. And I’m supposed to open the show! gulp

Given that the title of my talk is There Is No Mobile Web, it may sound like I am once again courting controversy, but actually, I consider that to be a fairly uncontroversial viewpoint.

Much as I’m looking forward to the time in Tennessee, it’s a shame that I’ll have to duck out of town in the middle of the Brighton Digital Festival. I’ll miss out on BarCamp Brighton and Flash On The Beach.

Fortunately I will still be in town for Brainy Hacks on September 6th. It looks like Clare is putting together a great event: an evening of brainstorming design solutions for a non-profit:

Calling all creatives, strategists and planners - we need you to donate your brain to charity. We have a great brief from a not-for-profit organisation and you have two hours to solve it competing in teams of up to five to have your idea judged the best by our mega judges.

But if the time is going to pass pleasantly—with some food and drink to stir the creative juices—then a sponsor needs to step up and claim the glory. If you know of an appropriate organisation, get in touch with Clare.

Now, if you’ll excuse me, I need to get back to frantically putting slides together while I swirl deeper and deeper down into a pit of inadequacy-fuelled pseudocompetence.