One hundred and seven

The word “awesome” is over-used. I’m about to over-use it some more.

The internet is mostly awesome. Some human beings are also awesome. When you combine the two, you get awesome things. Here are just two such awesome things:

Take a look at the line-up and schedule for UX London next May. It’s going to be fan-bloody-tastic.

I’m particularly excited about seeing Scott McCloud. When Kai found out that I had never read Understanding Comics, he very kindly sent me a copy. Now I understand what all the fuss is about. It’s a superb book and extremely relevant to interaction design …hence my excitement about Scott McCloud’s appearance at UX London.

Before reading Understanding Comics, the only Scott McCloud work I had seen was the Google Chrome comic. It was quite an achievement—there’s no way I would have read through forty pages of documentation for a web browser if it weren’t for the format it was in. It convinced me that comics could be a very powerful way of communicating online (just ask the CSS Squirrel).

Speaking of online comics, if you don’t think 2D Goggles is one of the best things on the web, your geek credentials are hereby revoked. Oh, and if you’ve never read The Spiders, do yourself a favour and track it down.

When Brad Colbow approached me about reformatting my post Misunderstanding Markup into an online comic, I thought it was a great idea—an excellent way of spreading the message of the post in a more enjoyable format. I didn’t expect the finished result to be quite so excellent. It was a smash hit. Scott McCloud liked it too.

I asked Brad if he could help me out with something else. For a while now, I’ve wanted to do something with the “about” page on Huffduffer. Don’t get me wrong; I think the copy is pretty good. It’s just a little …flat. I thought that illustrations would really help to bring it to life. Brad very kindly agreed.

We discussed various ideas. There were two possible narrative strands: we could use the wartime story of huffduffing or we could choose a more literal but abstract approach in explaining how the site works. Brad came up with some sketches for both and they were so good, I just couldn’t decide between them. So we opted to go with a kind of split-screen parallel story.

The finished results exceeded my expectations. Brad’s ability to come up creative solutions is matched only by his ability to execute them brilliantly.

Don’t take my word for it. Take a look at the final result for yourself.

I’ve been turned into a caricature. Again.

First there was my Happy Webby, now it’s Smashing Magazine (and that’s not even counting CSS Squirrel).

The very talented Brad Colbow created a comic version of my post Misunderstanding Markup. Not a bad likeness, eh? Mind you, I think Eva-Lotta Lamm really managed to capture my essence at dConstruct last year. 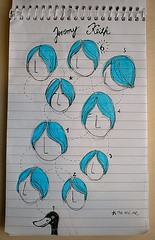 There’s no denying it; I’m much more likely to read something from start to finish when it’s in comic form. Scott McCloud’s Google Chrome comic is the perfect example—it’s unlikely that I would have read the entire technical documentation for a web browser if it hadn’t been presented as sequential art. Now take a look at the “about” page on Huffduffer—wouldn’t you be more likely to digest that content if it were illustrated?