Dave wrote a while back about an experiment he conducted in paperless air travel. Today I travelled from Heathrow to Frankfurt without wasting a drop of ink.

I flew with Lufthansa who are now offering mobile boarding passes. You can get a test boarding pass sent to your phone by SMS or email if you want to see how it works. In my case, I went to the boarding pass URL in a desktop browser, saved the page as a PDF and slapped that onto my iPod Touch using FileMagnet.

It worked a treat. When I was going through security and when I was boarding the plane, I showed my passport and my iPod. They took the iPod, put it under the same scanner they were using for paper boarding passes and scanned the QR code on the screen.

I like paper as much as the next dead-tree fetishist but this was one instance where I was happy to go digital. 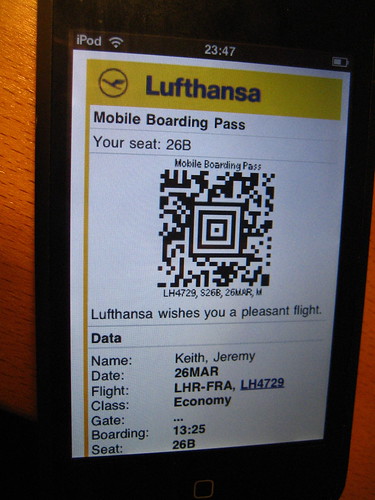 Hacky holidays on the iPod Touch

I’m guessing that one of the more popular gifts this season is the iPod Touch. Christmas came early for me; I picked up my iTouch when I was in San Francisco in October. Thanks to Jina and a weak dollar, the price was right.

Ever since then, I’ve been making the most of it. The 16GB capacity is a bit limiting—my music collection is somewhat larger than that—but the combination of WiFi and a kickass web browser more than compensates. An iPod Shuffle is still probably the best choice for accompaniment on a brisk walk but the Touch is the perfect traveling companion on a train or plane.

I’ve been meaning to sit down and hack open the iPod but I just haven’t had the time… until now. As well as being the ideal time for wresting with operating system upgrades, this Christmas break in Arizona is the perfect opportunity for a bit of jailbreaking.

If you got a brand new iPod Touch for Christmas and you’d like to install third-party apps, here’s what you need to do.

You can follow all the steps required to downgrade. Be warned: this will remove any songs, movies and photos that you have on your iPod—you’ll need to sync again at the end of all this in order to get your stuff back on there.

Once you’re running version 1.1.1, hacking the iPod Touch is very simple. Make sure you’re online and then use Safari on the iPod to navigate to jailbreakme.com. Scroll down to the end of that page and click on “Install AppSnapp.” Safari will quit and you will see a progress indicator while your iPod gets cracked open (if you don’t see the progress indicator, go back into Safari and try that link again).

Once that’s done, you’ll have a new app on your iPod’s desktop called Installer.

The new Installer app on your iPod is your gateway to a world of third-party wonders. Here are my recommendations.

This Last.fm app is wonderful. It’s like having a radio on your iPod but a radio that knows exactly what kind of music you like. While a song is playing, you can view an artist bio, read the song lyrics and even see upcoming tour dates. Get this: if you click on one of those concert dates, the event will be added to your Calendar app.

This is my IRC client of choice on the desktop so I was really happy to see that a version was available for the iPod Touch. It works a treat. Now I can pop into #microformats on freenode.net any time I want.

Once you’ve got this eBook reader installed, you can download works in the public domain such as The Origin of Species and The Adventures of Sherlock Holmes as well as the Creative Commons licensed Free Culture by Lawrence Lessig.

This is like the Books application but it’s specifically for StarDict dictionaries, of which there are many available to install. Install as many dictionaries as you like and you can then run simultaneous searches against them all. A single dictionary takes up less space than the average MP3.

There’s a Tetris clone called Tetromino, a Chess app called Caissa, a fiendishly addictive game called Lights Off and of course, the ubiquitous Sudoku. The Sketches app isn’t strictly speaking a game but it sure is fun. It’s like etch-a-sketch—you can even shake the iPod to erase your drawings.

Ingenious as all these third-party apps are, you’re probably most eager to get your hands on those iPhone apps that for some reason known only to Steve Jobs, didn’t ship with the iPod Touch. Maps, Notes, Weather and Mail; these are all apps that can run perfectly well on your iPod.

By default, the Installer app doesn’t offer these applications. You can remedy that by clicking on the Sources list in Installer, then pressing the Edit button in the top right corner and then Add in the top left. Enter http://repo.us.to/ as a new source.

Now the Install list will show new categories including “iPhone 1.1.2 Apps for iTouch”. That’s where you’ll find the iPhone goodies, each one accompanied by a stern warning that you should of course already own an iPhone in order to install these apps (wink, wink). If you plan on installing Maps or Mail, be sure to install the corresponding Maps Prep and Mail Prep applications first.

Having the Maps application running on the iPod Touch is worth any jailbreaking hassle. It instantly makes the device more useful (and more fun).

Usually, accounts of iPod or iPhone hacking are accompanied by caveats absolving the author of any culpability so at this point I should probably say something about this all being at your own risk and yadda, yadda, yadda. But I’m not going to say that. Instead, I say if you’ve got an iPod Touch, jailbreak it now. It will unlock the latent power of that Turing machine in the palm of your hand and turn it from being an MP3 player into a true mobile device.

If something does go horribly wrong, the worst that’s going to happen is that you’ll need to restore your iPod Touch to its factory settings—something you can do in one click from iTunes.

Portrait of an Elderly Man by Rembrandt is remarkable not just for its treatment of light and shadow but also—as Jessica pointed out—it must be one of the first recorded instances of iPod earbuds in western art.

Specifically, I think these people should all discover the joys of listening to music on headphones: