An email to The Guardian

My name is Jeremy and I’ve been a paid subscriber to The Guardian for a few years now. But I’m considering cancelling my account after reading this editorial.

On the face of it, the headline of the article sound reasonable and hard to disagree with. But the substance of the article downplays anti-trans views as simply being “gender critical.” This is akin to describing segregationist views as “integration critical.”

This line is particularly egregious:

Setting up these positions as though one in any way invalidates the other gives oxygen to those who wish to paint someone’s identity as a threat. I’m very disappointed to see this viewpoint expressed in an editorial on The Guardian website.

A few months back, I got an email with the subject line:

“Ooh, sounds interesting”, I thought. I read on…

I’ve been tasked with writing a profile of you from my tech editor at Fortune, a business magazine in the U.S.

Sounded urgent! “I’d better call him straight away”, I thought. So I did just that. It went to voicemail. The voicemail inbox was full. I couldn’t leave a message.

So I sent him an email and eventually we managed to have a phone conversation together. Richard—for that is his name—told me about the article he wanted to write about the “scene” in Brighton. He asked if there was anyone else I thought he should speak to. I was more than happy to put him in touch with Rosa and Dot, Jacqueline, Jonathan, and other lovely people behind Brighton institutions like Codebar, Curiosity Hub, and The Skiff. We also arranged to meet up when he came to town.

The day of Richard’s visit rolled around and I spent the afternoon showing him around town and chatting. He seemed somewhat distracted but occasionally jotted down notes in response to something I said.

The resultant article is online now. It’s interesting to see which of my remarks were used in the end …and the way that what looks like direct quotes are actually nothing of the kind. Still, that’s way that journalism tends to work—far more of a subjective opinionated approach than simply objectively documenting.

The article focuses a lot on San Francisco, and Richard’s opinions of the scene there. It makes for an interesting read, but it’s a little weird to see quotes attributed to me interspersed amongst a strongly-worded criticism of a city I don’t live in.

Still, the final result is a good read. And I really, really like the liberal sprinkling of hyperlinks throughout—more of this kind of thing in online articles, please!

There is one hyperlink omission though. It’s in this passage where Richard describes what I’m eating as we chatted:

“But here’s the thing I love about this town,” said Keith, in between bites of a sweet corn fritter, at the festival’s launch party this year. “It cares as much about art and education as about tech and commerce.”

That sweet corn fritter was from CanTina. Very tasty it was too.

When I was preparing my Responsive Enhancement workshop for last year’s dConstruct, I thought I should create an example site to demonstrate the various techniques I would be talking about to demonstrate how responsive design could be combined with progressive enhancement to make something works great on any device.

Round about that time, while I was scratching my head trying to figure out what the fake example site should be, I got an email from Bobbie asking if I wanted to meet up for a coffee and a chat. We met up and he told me about a project he wanted to do with his colleague Jim Giles. They wanted to create a place for really good long-form journalism on science and technology.

“The thing is,” said Bobbie, “we want to make sure it’s readable on phones, on tablets, on Kindles, everything really. But we don’t know the best approach to take for that.”

“Well, Bobbie, it’s funny you should mention that,” I said. “I’m currently putting together a workshop all about responsive design, which sounds perfect for what you want to do. And I need to create an example site to showcase the ideas.”

It was a perfect match. Bobbie gave me his design principles, personas, and—most importantly—content. In return, he would get a prototype that would demonstrate how that content could be readable on any device; perfect for drumming up interest and investment.

The workshop went really well, and some great ideas came out of the brainstorming the attendees were doing.

A few months later, Bobbie and Jim put the project—now called Matter—up on Kickstarter. They met their target, and then some. Clearly there was a lot of interest in well-written original journalism on the web. Now they had to build it.

They got hold of Phil to do the backend so that was sorted but Bobbie asked me if I knew any kick-ass designers and front-end developers.

“Well, I would love to work on it,” I said. “So how about working with Clearleft?”

“I didn’t think you guys would be available,” he said. “I’d love to work with you!”

And so we began a very fun collaboration. Paul moved his desk next to mine and we started playing around with the visual design and front-end development. Phil and Bobbie came by and we hammered out design principles, user journeys, and all that fun stuff. 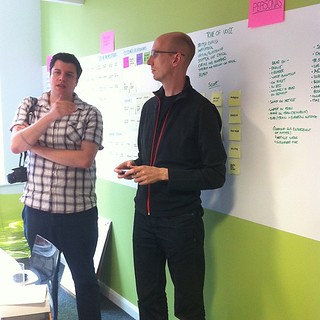 It was really nice to work on a project where readability took centre stage. “Privilege the reading experience” was our motto.

Paul did some fantastic work, not just on creating a typographic system, but also creating a brand identity including what I think is a really great logo. 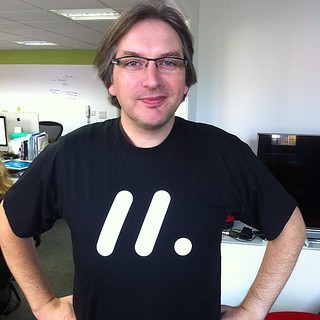 I started putting together a system of markup and CSS patterns, using the device lab to test them. Phil started implementing those patterns using Django. It all went very smoothly indeed. 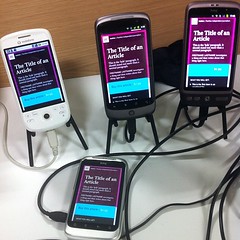 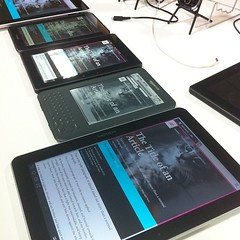 Today is launch day. Matter is live. If you backed the project on Kickstarter, you’ve got mail. If not, you can buy the first issue for a mere 99 cents.

The first piece is a doozy. It’s called Do No Harm:

Why do some people want to amputate a perfectly healthy limb? And why would any doctor help them?

If this is indicative of the kind of work that Matter will be publishing, it will definitely live up to its ambitious promise:

MATTER commissions, crafts and publishes unmissable journalism about science, technology and the ideas shaping our future.

A few days ago, I got an email through Flickr from someone at the Daily Telegraph asking me to get in touch with them urgently. I gave them a call. It turned out that they wanted to use some of my Flickr pictures in an article for the travel section.

I told them that would be fine. I also told them that they didn’t even need to ask: all my pictures are licensed under a Creative Commons attribution license. They weren’t familiar with this so I sent them an email with some links and further explanation.

It strikes me that Flickr could be a very valuable resource for newspapers and magazines. The advanced search allows you to search specifically for Creative Commons licensed photos that can be used commercially.

The paper came out today and, sure enough, my pictures were in the travel section, duly credited. Funnily enough, this was the second time in one week that I had been contacted by the mainstream media. Matt Bradley from the Christian Science Monitor called me in the run up to a story about Little Green Footballs. I had to confess that I haven’t visited that site in years, and I have no intention of going back to it. My explanation for abandoning the site is linked from the Wikipedia entry, which must be why I got the call in the first place.

I guess I didn’t have any good soundbites though. None of my pearls of wisdom made it into the finished article.