I’m taking a nice long weekend break after dConstruct on Friday (I will of course have more to say on that—I’m collecting my thoughts still—but it was a wonderful day).

On Saturday I did absolutely nothing. It was just as well really, considering that I may have over-indulged in the pub on Friday evening after dConstruct was done. So a day of lounging around idly playing mandolin was just the ticket.

Yesterday, Sunday, I had one of those perfect leisurely days.

It began with a good bout of lazing about in the morning. Then, as lunchtime approached, Jessica and I went to a nearby pub for a Sunday Roast. In this case it was the Dover Castle. It turned out to be an excellent choice—top notch roasts!

While we were enjoying our lunch, Jessica spotted a poster on the wall for Bark In The Park, a local fun day of dog-centred activities. We were sure it had already happened earlier in Summer, but the poster said it was rescheduled to …yesterday! 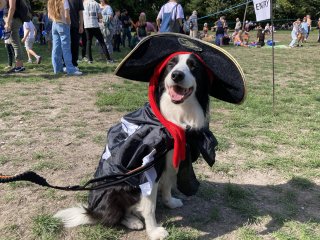 So after lunch we went to the park and spent the next few hours in the sunshine, petting very good dogs and enjoying the spectacle of such catgories as “fancy dress”, “best rescue”, and “sausage catching.” We left shortly before the announcement of “best in show”—my money was on Mayhem—so I could nip home, grab my mandolin, and head to The Bugle pub for the weekly 4pm Irish music session. 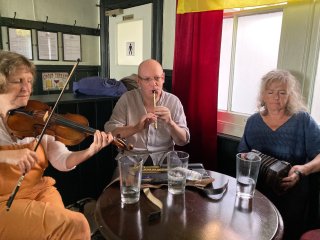 After two hours of jigs’n’reels, I headed home. The weather was still lovely. The forecast was for cloudy weather, but it was unexpectedly sunny. So I fired up the outdoor grill.

We grilled: one aubergine, halved and scored; one yellow courgette, halved; one green courgette, halved; half a hispe cabbage, quartered. Once they were nicely charred outside and soft within, we ate them with a drizzle of tahini sauce, accompanied by a green salad.

By that time the sun had gone down and it was time for a nice evening spent watching the latest episode of The Rings Of Power and drinking a nice cup of tea.

The schedule for dConstruct 2022

The last ever dConstruct will happen just over three weeks from now, on Friday, September 9th.

That’s right—if you don’t have your ticket for this event, you won’t get another chance. The conference with its eye on the future will become a thing of the past.

dConstruct is going to go out with a bang, a veritable fireworks display of mind bombs. A calligrapher, a writer, a musician, and a nueroscientist will be on the line-up alongside designers and technologists.

Here’s the schedule for the day:

So the first talk starts at 10am and the last talk finishes at 4:30pm—all very civilised. Then we can all go to the pub.

There isn’t an official after-party but we can collectively nominate a nearby watering hole—the Unbarred taproom perhaps, or maybe The Hare And Hounds or The Joker—they’re all within cat-swinging distance of The Duke Of York’s.

Lunch isn’t provided but there are some excellent options nearby (and you’ll have a good hour and a half for the lunch break so there’s no rush).

The aforementioned Joker has superb hot wings from Lost Boys Chicken (I recommed the Rufio sauce if you like ‘em spicy, otherwise Thuddbutt is a good all ‘rounder).

The nearby Open Market has some excellent food options, including Casa Azul for superb Mexican food, and Kouzina for hearty Greek fare.

And the famous Bardsley’s fish’n’chips is just ‘round the corner too.

So there’ll be plenty of food for the soul to match the food for your brain that’ll be doled up at dConstruct 2022.