I’m back from Munich, where I spent three solid days workshopping with AutoScout24. I’m happy to report that it went really, really well. It’s restored my confidence after the negative feedback I got in Tel Aviv.

Three days is quite a long time to spend workshopping, so I was mostly winging it. But that extended period also allowed us to dive deep into specific issues and questions (all the usual suspects: how to handle navigation, images, complex interactions, etc.).

The real issues, however, were much more “bigger picture”—how to handle the transition to responsive of a big desktop-centric site that’s been growing for over a decade. By the end of the three days, we had divided the options into three groups:

There’s no doubt about it: trying to apply responsive design to large-scale existing desktop-centric sites is really, really hard. The message I keep repeating in my workshops is that you can’t expect to just sprinkle on some magic media-query fairydust—it just doesn’t work that way. Instead, you’ve got to figure out a way to reframe all your challenges into a mobile-first way of thinking.

Instead of asking “How can I make these patterns (mega-menus, lightboxes, complex data tables) work when the screen size shrinks?”, you need to ask “What’s the problem they’re supposed to be solving, and how would I design a solution for the small screen to start with?” Once you’ve done that, then it becomes a matter of scaling up to the large screen …which is actually a much simpler problem space.

As is so often the case with web design, it requires the application of progressive enhancement. In the case of responsive design, that means starting with small-screen styles, small-screen images, and small-screen content priority. Then you can progressively enhance with layout styles, larger images, and conditional loading of nice-to-have extra content. Oh, and you absolutely have to accept and embrace the fact that websites do not need to look the same in every browser.

Making that change in thinking can be hugely challenging.

Remember when we were all making websites with tables for layout? Then the web standards movement came along, pushing for the separation of structure and presenation, urging us to use CSS for layout. It took the brain-rewiring power of the CSS Zen Garden to really give people that “A-ha!” moment.

Mobile-first responsive design requires a similar rewiring of the brain. And if you’re used to doing things a certain way, then it’s natural to resist such drastic change—although as Elliot pointed out at the Responsive Day Out, when you first make the switch it might be very tricky, but it gets easier and easier with each project.

Still, it can be a difficult message to hear. I suspect that’s why my workshop in Tel Aviv wasn’t so warmly received—I didn’t provide any easy answers.

The designers and developers at AutoScout24 also didn’t find it easy to accept how much they’d have to rethink their approach, but by the end of the three days they had a much clearer idea of how they could go about making that change. I’m really curious to see where they’ll go from here. Personally, I’m very optimistic about their prospects for successfully pulling off a large-scale responsive relaunch.

There are two main reasons for my optimism:

I can’t emphasise enough how important that kind of collaborative environment is.

I’ve said it before, and I’ll say it again; the biggest challenges of responsive design are not technology problems.:

No, the biggest challenges, in my experience, are to do with people. Specifically, the way that people work together.

I’ve spoken to some companies who were eager to make the switch to responsive design, but who have designers and developers sitting in different rooms, or on different floors, or buildings, or even countries. That’s when my heart sinks. Trying to work in the iterative way that a good responsive project demands is going to be massively difficult—if not downright impossible—in that environment.

So I’m pretty confident that if the designers and developers at AutoScout24 put their minds to it, they can rise to the enormous challenge that lies ahead of them. They’ve got the right working environment, they’ve got a UI library, and they’ve got the option of using their exising mobile subdomain. Most of all, they’ve demonstrated a willingness to accept all the challenges that come with changing from a desktop-centric to a content-first mindset.

All in all, it was a very productive three days in Munich. It was hard work, but then again, I had the option of rewarding myself with some excellent Bavarian food and beer each evening. 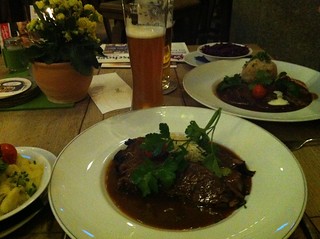