I have a new role at Clearleft. It’s not a full-time role. It’s in addition to my existing role of …um …whatever it is I do at Clearleft.

Anyway, my new part-time role is that of being a content buddy. Sounds a little dismissive when I put it like that. Let me put in capitals…

My new part-time role is that of being a Content Buddy.

This is Ellen’s idea. She’s been recruiting Content Guardians and Content Buddies. The Guardians will be responsible for coaxing content out of people, encouraging to write that blog post, article, or case study. The role of the Content Buddy is to help shepherd those pieces into the world.

I have let it be known throughout the office that I am available—day or night, rain or shine—for proof-reading, editing, and general brain-storming and rubber-ducking.

On my first official day as a Content Buddy on Friday I helped Ben polish off a really good blog post (watch this space), listened to a first run-through of Charlotte’s upcoming talk at the Up Front conference in Manchester (which is shaping up to be most excellent), and got together with Paul for a mutual brainstorming session for future conference talks. The fact that Paul is no longer a full-time employee at Clearleft is a mere technicality—Content Buddies for life!

Paul is preparing a talk on design systems for Smashing Conference in Freiburg in September. I’m preparing a talk on the A element for the HTML Special part of CSS Day in Amsterdam in just one month’s time (gulp!). We had both already done a bit of mind-mapping to get a jumble of ideas down on paper. We learned that from Ellen’s excellent workshop. 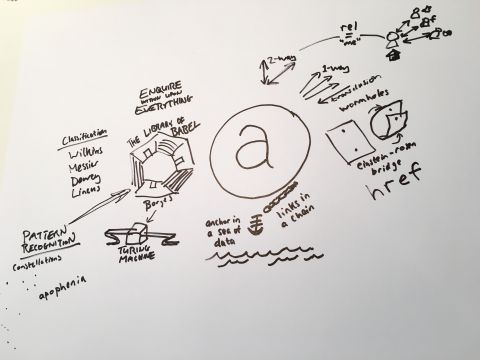 Then we started throwing ideas back and forth, offering suggestions, and spotting patterns. Once we had lots of discrete chunks of stuff outlined (but no idea how to piece them together), we did some short intense spurts of writing using the fiendish TheMostDangerousWritingApp.com. I looked at Paul’s mind map, chose a topic from it for him, and he had to write on that non-stop for three to five minutes. Meanwhile he picked a topic from my mind map and I had to do the same. It was exhausting but also exhilarating. Very quickly we had chunks of content that we could experiment with, putting them in together in different ways to find different narrative threads. I might experiment with publishing them as short standalone blog posts.

The point was not to have polished, finished content but rather to get to the “shitty first draft” stage quickly. We were following Hemingway’s advice:

…but not literally. Mind you, I could certainly imagine combining beer o’clock on Fridays with Content Buddiness. That wasn’t an option on this particular Friday though, as I had to run off to band practice with Salter Cane. A very different, and altogether darker form of content creation.