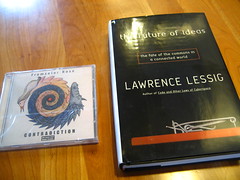 I’m off to Copenhagen for Reboot 10. Reboot is always a fun gathering. It might not be the most useful event but as part of a balanced conference diet, it’s got a unique European flavour.

As usual, I’m going to use the opportunity to talk about something a bit different to my usual web development spiels. This time I’ll be talking about The Transmission of Tradition, a subject I’ve already road-tested at BarCamp London 3:

This talk will look at the past, present and future of transmitting traditional Irish music from the dance to the digital, punctuated with some examples of the tunes. This will serve as a starting point for a discussion of ideas such as the public domain, copyright and the emergence of a reputation economy on the Web.

At the very least, it will give me a chance to debut that mandolin I picked up in Nashville.

This will be my third Reboot. My previous talks were:

I recently discovered the video of that last presentation. Jessica was kind enough to transcribe the whole thing. She also transcribed my talk from this year’s XTech. Go ahead and read through them if you have the time.

If you don’t have the time, you can always mark them for later reading using Instapaper. I love that app. It does one simple little thing but does it really well. Hit a bookmarklet labelled “read later” and you’re done.

Maybe I should fire them up in multiple tabs and read them on the flight to Denmark. Or I could spend the time brushing up on my Danish.

If you’re headed to Reboot, I’ll see you there. Otherwise …Farvel!

Now that I’m done travelling for pleasure, it’s time for me to travel for business again. I’m heading out to San Francisco for the Supernova conference. Tantek has roped me into moderating a panel called Bottom-Up Distributed Openness.

I’ll be showing up in SF next Friday. Until then, I’ll be in Nashville for the somewhat embarrassingly-titled Voices That Matter conference where I’ll be delivering a half-day workshop on Ajax and a presentation on microformats.

While I’m in the heartland, I’m planning to treat myself to a new mandolin. Then I can bring that mandolin with me when I go to Copenhagen at the end of the month for Reboot 10 where, if my proposal is accepted, I’ll be talking on The Transmission of Tradtion. The video of my talk from last year, the pretentiously-titled Soul is available for your viewing pleasure. I’ll see about getting it transcribed and added to the articles section here.

All that’s ahead of me. Right now I need to prepare myself for the long and tedious trip across the Atlantic. See you in Nashville, San Francisco or Copenhagen.