I made a little tweak to The Session today. The navigation bar across the top is “sticky” now—it doesn’t scroll with the rest of the content.

I made sure that the stickiness only kicks in if the screen is both wide and tall enough to warrant it. Vertical media queries are your friend!

But it’s not enough to just put some position: fixed CSS inside a media query. There are some knock-on effects that I needed to mitigate.

I use the space bar to paginate through long pages. It drives me nuts when sites with sticky headers don’t accommodate this. I made use of Tim Murtaugh’s sticky pagination fixer. It makes sure that page-jumping with the keyboard (using the space bar or page down) still works. I remember when I linked to this script two years ago, thinking “I bet this will come in handy one day.” Past me was right!

The other “gotcha!” with having a sticky header is making sure that in-page anchors still work. Nicolas Gallagher covers the options for this in a post called Jump links and viewport positioning. Here’s the CSS I ended up using:

I also needed to check any of my existing JavaScript to see if I was using scrollTo anywhere, and adjust the calculations to account for the newly-sticky header.

Anyway, just a few things to consider if you’re going to make a navigational element “sticky”:

A few weeks ago, when I changed how the front page of this site works, I wrote about “streams”, infinite scrolling, and the back button:

Anyway, you’ll notice that the new home page of adactio.com is still using pagination. That’s related to another issue and I suspect that this is the same reason that we haven’t seen search engines like Google introduce stream-like behaviour instead of pagination for search results: what happens when you’ve left a stream but you use the browser’s back button to return to it?

In all likelihood you won’t be returned to the same spot in the stream that were in before. Instead you’re more likely to be dumped back at the default list view (the first ten or twenty items).

That’s exactly what Kyle Kneath is trying to solve with this nifty experiment with infinite scroll and the HTML5 History API. I should investigate this further. Although, like I said in my post, I would probably replace automatic infinite scrolling with an explicit user-initiated action:

Interpreting one action by a user—scrolling down the screen—as implicit permission to carry out another action—load more items—is a dangerous assumption.

Kyle’s code is available from GitHub (of course). As written, it relies on some library support—like jQuery—but with a little bit of tweaking, I’m sure it could be rewritten to remove any dependencies (hint, hint, lazy web). 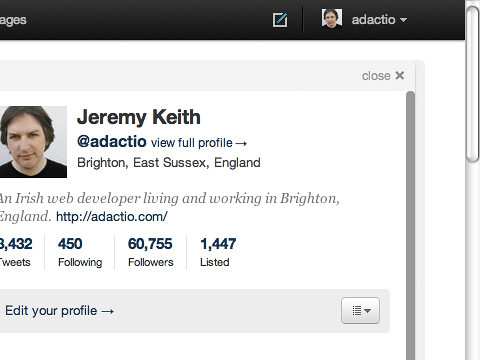 The audio of place

Last year, the good people at Web Directions asked me if I would like to write an article for the second issue of their Scroll magazine—an honest-to-goodness dead-tree publication. I told them I would be delighted.

The theme of the issue was “place.” I took the word and ran with it, delivering an over-the-top pretentious piece about language, wormholes and virtual worlds. An edited version appeared in the magazine as Disrupting the conceptual metaphors of the web.

I’ve published the raw, unedited version here in the articles section under its original title of There Is No “There” There. I also recorded an audio version, which clocks in at just over eight and a half minutes.

Feel free to huffduff it. Feel free to anything you like with it: it’s licenced under a Creative Commons attribution license.