I don’t get up to London that often. Much as I like the place, the travel to and fro from Brighton can be exhausting, given the woeful state of the rail services on that line—just ask anybody who does the daily commute.

On Monday, I had an appointment in London. Rather than take the usual train to Victoria, it made more sense to take the London Bridge route. It must have been quite a while since I was last on that train because, as it pulled into London Bridge station, I was confronted with the impressive sight of a science fictional structure rising out of the city: the Shard. 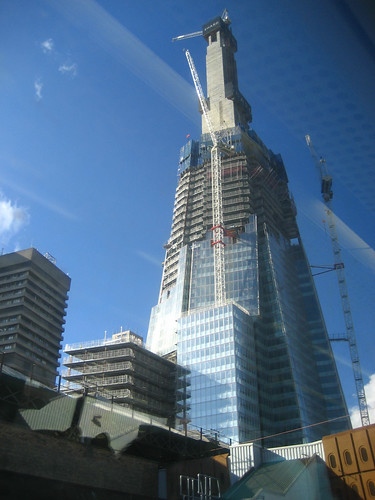 From my subjective perspective, it came out of nowhere. The sense of having a large chunk of the future come crashing into my present was amplified by the soundscape; I was listening to the soundtrack from science-fiction film on a small, handheld touchscreen device with more storage than the combined hard drive space of all the computers I ever used up to just a few years ago. The last time I experienced this collision was on the train between Copenhagen and Malmö, listening to the soundtrack to Blade Runner, looking out at the colossal turbines of the offshore wind farm.

On my way back to Brighton, the experience was reversed. Heralded by the kind of doppler-stretched whistle that you only hear in old films, a steam engine raced by, hauling dining cars of elegantly-decked tables draped in white, a lamp on each one.

“The future is already here”, said William Gibson. “It’s just not very evenly distributed.” The past is still here too, equally unevenly-distributed.

The present is a lumpy place on the timeline.