I just got back from Nürnberg where I gave the closing talk at the cheap’n’cheerful border:none event. It was my first time in Nürnberg and I wish I could’ve stayed longer in such a beautiful place. I would’ve liked to stick around for today’s Open Device Lab admin meetup, but alas I had to get up at the crack of dawn to start making my way back to Brighton.

I was in Germany last month too. That time I was in Freiburg, where I was giving the closing talk at Smashing Conference. That was a lot of fun:

So I threw away my slidedeck and went Keynote commando.

The video from that slideless talk is up on Vimeo now for your viewing and/or downloading pleasure.

If you watch it through to the end, then you’ll know why I could be found immediately afterwards showing people some centuries-old carvings on Freiburg’s cathedral. 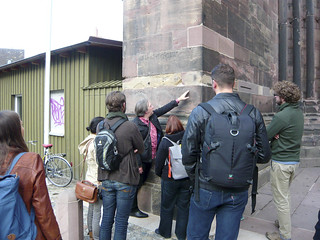 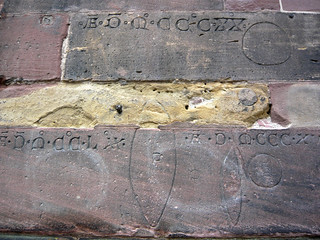 Update: I’ve published a transcript of the talk. 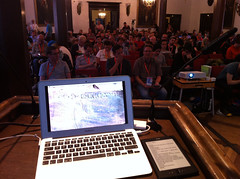 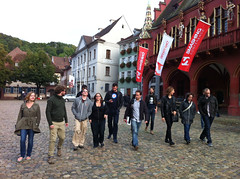 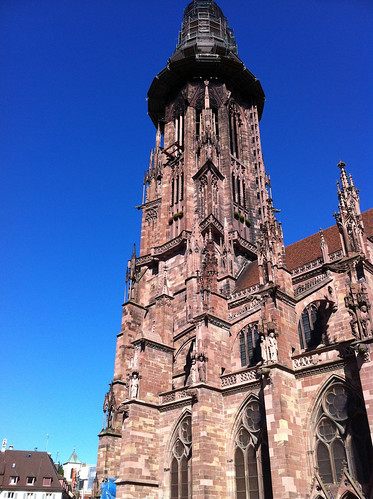 I was in southern Germany this week to speak at the inaugural Smashing Conference. It was a really good event, packed with in-depth talks and workshops for web developers. Its practical nature contrasted nicely with the more inspirational value of dConstruct. I always say it’s good to have a balanced conference diet: too much code and I start itching for big-picture thinking; too much big-picture thinking and I start jonesing for some code.

I used to live there. I lived there for about six years, all told, during the ’90s. That’s where I met Jessica.

To start with, I was playing music on the streets of Freiburg. Later, I got a job in a bakery, selling bread, pretzels and all manner of excellent baked goods. Meanwhile, I was playing in a band (two bands actually: for a while I was the bassist in Leopold Kraus, the finest surf band in the Black Forest). At some point, the band decided we needed a website. I said I’d give it a go. That’s when this whole web thing started for me. I started freelancing on the side. Before too long, I was able to give up the bread-selling day job.

But after six years, Jessica and I decided that we were done with Freiburg. We moved to Brighton, where we’ve lived for twelve years now.

So it was with some excitement and a certain amount of nervous anticipation that we returned to Freiburg for the Smashing Conference. What would Freiburg be like now? Would it feel weird to be back there?

Well, Jessica has written all about what it was like to go back. I highly recommend that you read what she’s written because she puts it far better than I ever could.

Jessica has been publishing online at wordridden.com since we lived in Germany. Reading back through her posts from way back then about life in Freiburg makes me wish that I had started writing on adactio.com sooner. I don’t have much evidence of my time there: a box of cassettes (cassettes!) that the band recorded; a handful of photographs.

On this trip, I took quite a few photographs. In three days, I recorded an order of magnitude more data than I had done in six years of living in Freiburg.